A range of deals have seen the cruise industry boost growth and sustainability around the world:

Future of The Fjords

Tourist shipowner and operator The Fjords took delivery of a Future of the Fjords, a 42-meter (138-foot) long carbon fibre 400 PAX all-electric catamaran last month. The vessel will begin operation in mid-May, making around 700 yearly round trips along the UNESCO World Heritage listed fjord route between Flåm and Gudvangen. It is the first vessel of its kind to offer completely emission free transport through the Western Norwegian landscape.

The vessel is propelled by two 450kW electric motors, enabling cruising speeds of 16 knots. She also has a unique charging solution called the Power Dock. This 40-meter long floating glass fiber dock will sit in the water at Gudvangen, housing a 2.4 MWh battery pack. This charges steadily throughout the day via connection to the local grid network, which does not have the capacity to charge the Future of The Fjords directly. The solution allows the vessel to stably, efficiently and cost effectively recharge in 20 minutes.

What’s more, the dock also stores consumables, fuel for sister vessels, and allows black water to be offloaded for treatment on land. This makes Future of The Fjords the only passenger vessel not to discharge sewage directly into the fjords.

Future of The Fjords is the sister ship to Vision of The Fjords, a diesel electric hybrid launched in 2016, both designed and constructed by Norwegian shipyard Brødrene Aa. 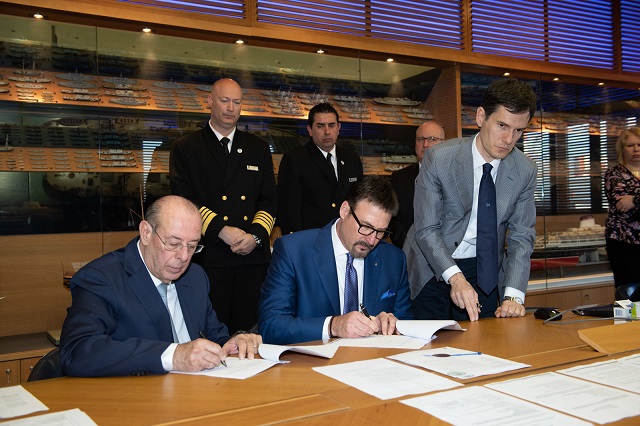 Seabourn took delivery of its newest ship, Seabourn Ovation, late last month during an official handover ceremony at the Fincantieri shipyard in Genoa, Italy. Seabourn Ovation is the fifth ship in the line's fleet and will spend the summer 2018 season sailing in Northern Europe.

Seabourn Ovation will begin her maiden season with an 11-day inaugural voyage departing May 5, 2018, from Venice, Italy, to Barcelona, Spain. The ship's naming ceremony will take place on Friday, May 11, in Valletta, Malta. The ship will spend the majority of its maiden season cruising the waters of Northern Europe, offering a series of seven-day Baltic and Scandinavian sailings between Copenhagen and Stockholm. Seabourn Ovation will also sail on longer 14-day voyages, visiting the Norwegian fjords and British Isles.

TUI Cruises took delivery of its largest cruise ship, the new Mein Schiff 1, from Meyer Turku on April 25. The fifth new cruise ship Meyer Turku has built for TUI Cruises in just five years, the 111,500-gross ton Mein Schiff 1 is more than 10 percent bigger than the prior ships with nearly a 14 percent increase in passenger capacity. 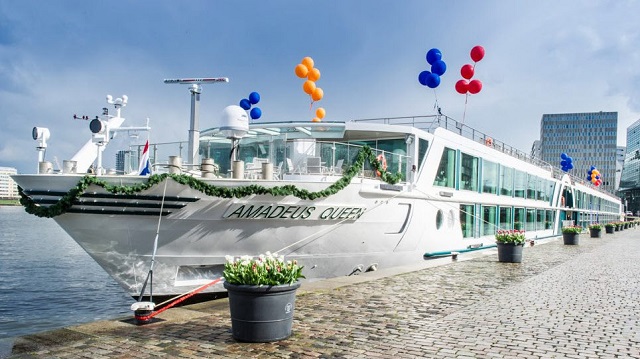 The Amadeus Queen was christened in Amsterdam on April 4 by De Hoop shipyard in the Netherlands for owner Lueftner Cruises. The has entered service and is operating in Europe - mainly on the rivers Rhine, Main and Danube, along with other Dutch and Belgian waterways.

In order to isolate vibrations from the propulsion units, a double flexible mounting system has been installed. On both sides, the azimuthing thrusters are mounted on separated bottom sections which are resiliently integrated in a frame of the ship’s bottom. The main engines are mounted on double vibration dampers and paired to the thruster units through flexible couplings. This “boat-in-boat” solution reduces sound levels in the public spaces and guest cabins. To lower the impact of propeller blade impulses to the hull, an air curtain buffer was installed by blowing air in between the propeller and hull. With this, the pressure pulses are not transmitted to the hull. 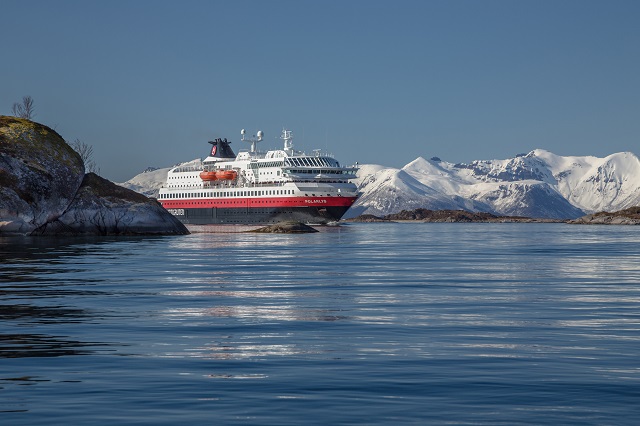 Norwegian cruise ferry operator Hurtigruten has signed a Letter of Intent with Rolls-Royce for a major environmental upgrade program to hybrid power. The main engines on up to nine cruise ships will switch from diesel to gas power and the upgrade will also include installation of a hybrid battery system.

The deal comprises the supply of equipment to six existing passenger cruise vessels, with an option for a further three. The ships will completely change their power system with the installation of new Rolls-Royce LNG-engines as part of a new hybrid system. The upgrade will enable the former diesel-powered ships to reduce CO2-emissions by at least 25 percent. Rolls-Royce will also supply the latest electrical power SAVe Cube system, designed with a single integrated drive switchboard for the whole vessel. Additional battery power will also be installed. The propulsion system is planned to also include the Promas system, which combines rudder and propeller into one fuel efficient unit.

The new cruise quay in Visby in Sweden has opened with the visit to the port of the ship AIDAdiva. The venture is a collaboration between Region Gotland and Copenhagen Malmö Port, CMP, with Region Gotland building the quay and CMP taking responsibility for its operation. Two 340-meter (1,115-foot) ships can dock simultaneously at the cruise quay. 90 arrivals with a total of some 90,000 passengers are scheduled to visit Gotland during this year’s cruise season. The aim is to reach 150,000 passengers within a few years.

Sustainability issues have played a major role during the project. The ships that come to Visby can empty their waste water into an underground basin, from where it is pumped onward to the sewage works. The sludge can then be used in biogas production on Gotland.

Representatives from the German government, the Seaport of Kiel and the Costa Group met on April 26 on board the cruise ship AIDAluna to determine how to further develop the maritime infrastructure, the economy and tourism in northern Germany sustainably. Agreement was reached on the construction of a shoreside power plant by Seehafen Kiel on the Ostseekai (Baltic Quay), the use of LNG to operate AIDA Cruises cruise ships while they stay in port, and the use of modern exhaust gas cleaning systems. 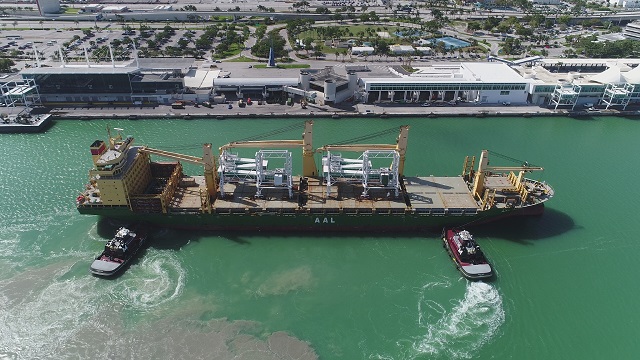 AAL has completed its first cargo shipment in partnership with new Spanish representative, Marítima Davila, transporting two giant seaport passenger boarding bridges to PortMiami in a single sailing. The bridges are for PortMiami’s newly renovated Terminal F where they will assist in the transit of many of the port’s 4.8 million annual cruise passengers.

Both walkways, measuring 32 meters (105 feet) long and weighing 205 tons each, were transported in a single sailing aboard the AAL Singapore, one of AAL’s Mega-MPV 31,000 dwt A-Class vessels. The four-sectioned, telescopic bridges were designed by Adelte.