Together with the Bilbao Maritime Captaincy and the rescue agency Salvamento Maritimo, a good samaritan vessel rescued the crew of the fishing vessel Siempre al Alba after a fire broke out on board off the coast of Armintza in Spain's Basque Country.

At about 0100 hours on Monday, a fire broke out on board the Siempre al Alba, a 90-foot commercial fishing vessel, at a position about six miles offshore. The 11 crewmembers were rescued by a good samaritan fishing vessel, the Nuevo Terreño, and were delivered safely to shore at Santoña.

The Maritime Captaincy directed an operation to put out the fire and salvage the fishing vessel, and Salvamento Marítimo (Sasemar) led the effort. It dispatched the rescue boat Salvamar Alcyone to assess the situation and the tugboat María de Maeztu to conduct firefighting. The rescue vessel Salvamar Monte Gorbea also joined the operation, along with the Bilbao port tug Ibaizabal Seis.

According to Sasemar, the fishing vessel's design and the material of its hull (fiberglass-epoxy composite) made the work of putting out the blaze and rigging a tow a difficult task. Images from the scene taken Monday showed the hull on fire and burning vigorously, including a section near the waterline on the port quarter.

The response team worked through the night and into the following morning in an attempt to extinguish the fire. On Tuesday, despite their efforts, the hulk went down at a position about 10 miles off Cabo Villano in 500 meters of water.

"The Maritime Captaincy and Sasemar have worked intensively, prioritizing at all times that the operation avoid any risk to people or navigation in the area," said the Deputy Delegate of the Government in Bizkaia, Vicente Reyes, in a message of thanks. 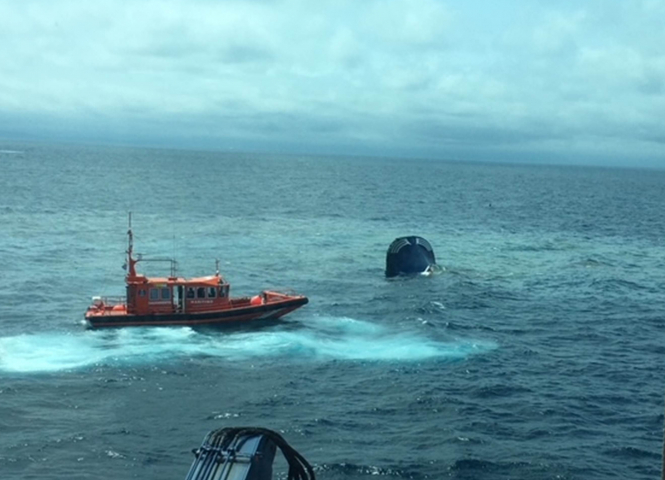