Residents of the Seattle Tacoma area saw an unusual sight on Wednesday as the first of several large cargo cranes began their journal along Puget Sound. It is part of a consolidation of operations along with preparations for the opening of enhanced port facilities next year.

Matson recently informed the Northwest Seaport Alliance (NWSA), which oversees the regions ports, that in an effort to lower operating costs and improve efficiency it would be consolidating its operations in the region. Matson has been operating weekly service from Seattle’s Terminal 5 to Hawaii as well as from Tacoma’s West Sitcum Terminal to Alaska. Both terminals are operated by SSA Marine. Matson said that it would end operations at Terminal 5 on August 28.

In discussions between the port authority, the terminal operator, and Matson, it was agreed as part of the consolidation that three of the large gantry cranes currently serving Terminal 5 would be moved down the Bay to continuing serving the Matson vessels now docking in Tacoma. The current cranes have been operating at Terminal 5 since the 1980s and were scheduled to be replaced in 2021 as part of the current upgrade project ongoing at T-5. 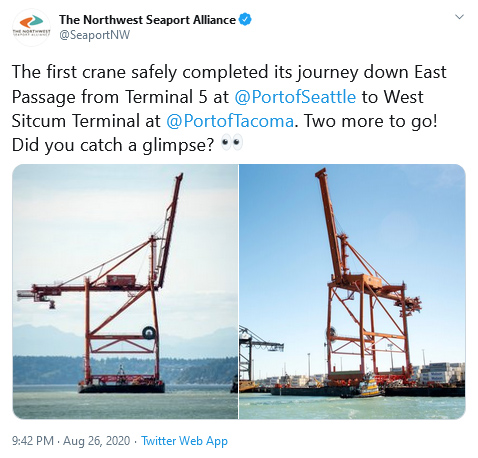 A barge was positioned alongside the dock at Terminal 5 and yesterday the crane was placed aboard. According to the NWSA, each crane will be raised with hydraulic jacks and then rotated 90 degrees and loaded on a barge. Around noon it was due to begin its five-hour journey with a tugboat to its new location in Tacoma. The other two cranes will follow next week. There are currently six cranes at T-5. Three will move with Matson and the other three are scheduled to be dismantled.

The Port of Seattle broke ground 13 months ago on a $500 million modernization project at T-5 designed to upgrade it to handle the world’s largest ships. It is designed to handle ships with up a capacity of to 18,000 TEU. The 185-acre terminal is expected to open in two phases, with one major berth ready to handle international container cargo in 2021, and the other berth ready in 2023.

When planning for the upgrades at Terminal 5 began in 2014, it could only handle vessels with a maximum capacity of 6,000 TEU. Terminal 5 was selected to be the centerpiece of the port’s upgrades due to its deep berth, wide footprint, and the availability of an on-dock rail yard. However, the new ultra-large container ships require larger, heavier cranes with a longer reach. To prepare for the addition of these new cranes in 2021, requires strengthening the dock and upgrading utilities.

With the modernized T-5, the NWSA expects to reach nearly 7 million TEUs by 2050 versus a current capacity which would have only support a growth to approximately 5.3 million TEUs in 2050, without the upgrades to Terminal 5.