Collisions between endangered North Atlantic right whales and large shipping vessels are one of the leading causes of death for these rare whales and hinder the recovery of their entire species of approximately 500 individuals. As a protection measure, mariners are required to travel at 10 knots or less in designated right whale habitat areas.

China COSCO Shipping Corporation and Mediterranean Shipping Company (MSC) led the industry with the strongest results over the past two years.

More than 2,000 total transits were evaluated involving 220 vessels and 149 companies in 2015 and 211 vessels and 145 companies in 2016. Analysis led by SBNMS research coordinator Dr David Wiley and spatial ecologist Michael Thompson showed significant improvements in compliance during the two year period. In 2015, 72 percent of vessels achieved A or A+ ratings, with 83 percent of vessels achieving such ratings in 2016. 15 percent of companies are still at or below C-level with 79 percent compliance or less.

The National Oceanic and Atmospheric Administration (NOAA), the government agency in charge of protecting right whales, promulgated the Right Whale Ship Strike Reduction Rule in 2008 to reduce the risk of serious injury and lethal collisions between ships and whales by requiring ships to reduce their speed to 10 knots or less in specially delineated Seasonal Management Areas (SMAs). Two of those areas (Cape Cod Bay SMA and Off Race Point SMA) are off the coast of Massachusetts and overlap the Stellwagen Bank National Marine Sanctuary (NMS).

Trips were tracked and ships and their corresponding companies were notified and provided with a grade depending on how closely they adhered to the provisions of NOAA's ship strike rule. Companies and ships that earned grades of A+ or A with 90 to 100 percent compliance were awarded Corporate Responsibility Certificates to acknowledge their whale protection efforts.

To increase mariner awareness and improve the ability of some vessels to comply with whale protection measures, IFAW, NOAA and the app development company Conserve IO have teamed to produce Whale Alert, a free smartphone app. Whale Alert displays right whale management measures for vessel operators on easy to read nautical charts and warns mariners when they enter a management area. Whale Alert also acts as a citizen science tool. Using Whale Alert mariners, recreational boaters and others on shore can report sighting of any whales directly to a database used by scientists. 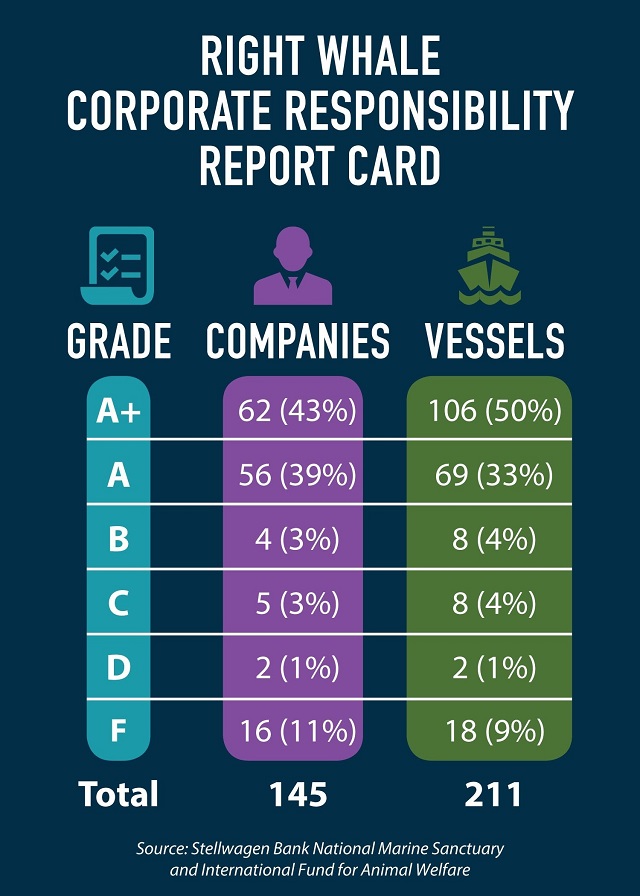