Construction of the first commercial offshore wind farm in France has been successfully completed ahead of schedule despite challenging seabed conditions. While a relatively small project with a capacity of 480 MW, the Saint-Nazaire Offshore Wind Farm however is being billed as a step contributing to achieving the target of 40 percent renewable energy by 2030 and carbon neutrality by 2050 in France.

The project, which is a partnership between Enbridge and EDF Renouvelables, is located approximately 7 to 12 miles off the Loire-Atlantique coast. The first phase of construction began in 2019 with the installation of the first of the 80 GE 6MW turbines starting in April of this year for the project that encompasses an area of approximately 30 square miles.

Installation of the turbines was contracted to Jan De Nul’s Offshore Jack-Up Installation Vessel Vole au vent. The first of the turbines was loaded on April 1 with the Vole au vent transporting the 6 MW wind turbines, in sets of four, from the Forme Joubert lock in the port of Saint-Nazaire along with the various components for installation on top of the foundations located on the Banc de Guérande seabed, in the northern part of the Bay of Biscay. The 80th and final turbine was successfully installed on September 5, which Jan De Nul highlights was significantly ahead of schedule.

The turbines were being installed at depths ranging from 40 to more than 80 feet but according to the company they encountered challenging soil conditions at the Banc de Guérande. The majority of the Saint-Nazaire turbines needed to be installed on an uneven rocky seabed. 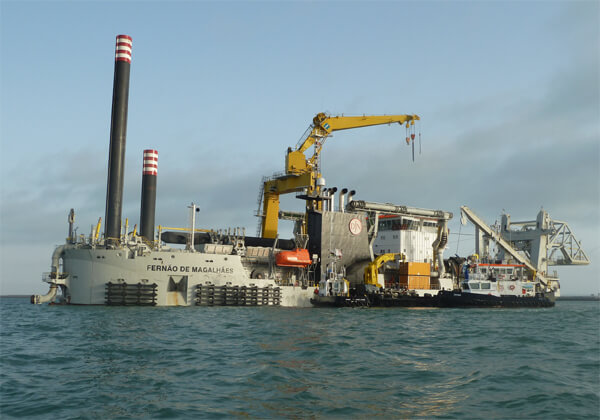 In the summer of 2021, to prepare for the installation, the company’s ocean-going Cutter Suction Dredger Fernão de Magalhães performed preparatory work. The dredger fragmented the seabed using her rotating cutter head to smooth the seabed which then allows the Vole au vent to perform jacking activities.

The wind farm is completing commissioning work. Fully operational, its capacity of 480 MW is equivalent to 20 percent of the Loire-Atlantique’s annual electricity consumption.