Congestion in Southern California Spreads to Other West Coast Ports

The congestion issues at the Southern California ports are also impacting the operations of other ports along the Pacific Coast. The Port of Oakland in the San Francisco Bay, which recently highlighted its available capacity, cited spreading supply chain congestion as a factor contributing to a decline in volumes in January.. At the same time, the San Francisco Bay is also becoming crowded with ships waiting for space at the container terminals.

Containerized cargo volumes declined at the Port of Oakland in January, with the port citing late arriving ships from Southern California as part of the reason the port saw a nearly 12 percent decline in imports and a better than 11 percent fall in export volumes versus a year ago. Congestion in Southern California is creating delays of up to a week for Oakland vessel arrivals causing ships to arrive off-schedule and sometimes miss berthing appointments.

Port officials also cited decreased space on outbound vessels for exports as the shipping lines are rushing to return empties to Asia. The volume of empties loaded at the port in January increased 24 percent versus January 2020 to over 36,000 TEU.

In addition to the delayed arrival of vessels, the port has also seen an increase in the number of ships coming directly to the central California port seeking to avoid the congestion at the San Pedro Bay ports. Earlier in February, Oakland marked the arrival of the first CMA CGM boxship, the 3,650 TEU Africa Four, sailing directly from China as part of the line’s rerouted express service that is now using terminals in Oakland and Seattle without stops in Southern California. According to the port, it has been more than a decade since Oakland offered a first-call service to U.S. importers. The port said that other ocean carriers are also contemplating Oakland first-calls by mid-year.

The influx of vessels into the port, however, is coming at a time when Oakland has temporarily lost berth capacity at its largest marine terminal.  As part of an upgrade to the port’s capabilities new cranes that will increase the volume are currently being assembled at the terminal resulting in a short-term loss in capacity. 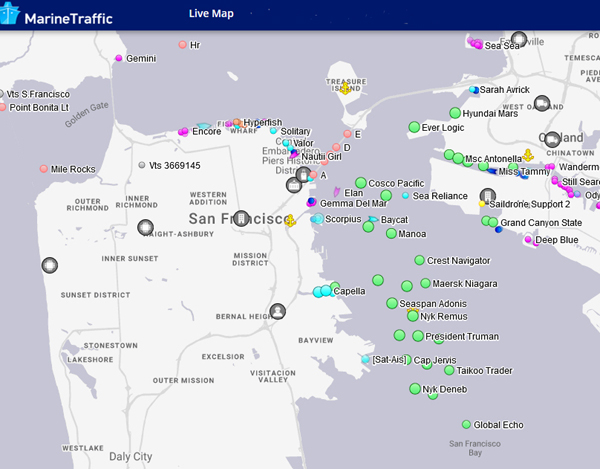 While the Southern California ports are working to catch up on their backlog, the congestion is now growing at the Oakland port. The Marine Exchange of Southern California reports that there are currently 104 ships in the ports of Los Angeles and Long Beach, but that in the anchorage the total has fallen from a high of 60 vessels to under 50 with 33 waiting for terminal space. In the San Francisco Bay, however, there are currently approximately 20 ships at anchor with only four additional anchorage spaces available. The U.S. Coast Guard reports that it has the authority to order ships to slow down and delay their arrival when the anchorage is full.

“There’s a lot of cargo trapped on ships just waiting to get to here after departing Southern California,” said Port of Oakland Maritime Director Bryan Brandes. “Our concern is getting shipments to our customers as quickly as we can.”

Oakland believes that the declining cargo volumes experienced in January were an anomaly and that the numbers will improve as the vessel logjam eases on the West Coast. Oakland officials expect that U.S. containerized import volume from Asia will remain strong at least through June.

This week, the Taiwan-based Wan Hai Lines announced as part of its revamped service it would be launching in mid-March a new route sailing from Taiwan and China with its first stop in Seattle before Oakland and returning to Asia. The line is promoting that it will reduce import transit times and increase loading options by providing direct service to the Pacific Northwest.