Over two tons of cocaine has been seized following a joint UK National Crime Agency, Border Force and Royal Navy operation in the North Sea.

Acting on intelligence supplied by the NCA, the ocean-going tug MV Hamal was intercepted by the Royal Navy frigate HMS Somerset and Border Force cutter Valiant about 100 miles east of the Aberdeenshire coast of Scotland on Thursday 23 April. 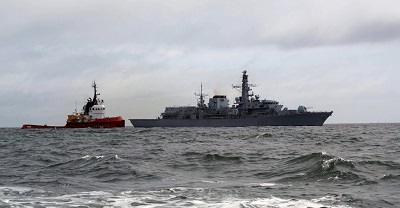 The operation was conducted following close cooperation with the French Customs Service DNRED and in coordination with the UK's National Maritime Information Centre (NMIC) plus the Maritime Analysis and Operational Centre - Narcotics (MAOC-N) based in Lisbon.

The crew of the Hamal, nine men all aged between 26 and 63, were detained for questioning by investigators from the NCA's Border Policing Command, and later charged with drug trafficking offences.

They remain in custody and will appear before Aberdeen Sheriff Court on Monday.

The tug drew the attention of French customs officers after it left the Canary Islands for northern Europe by an unusual route that skirted Britain. The officials believe that cocaine from South America may have been loaded in the Canary Islands. 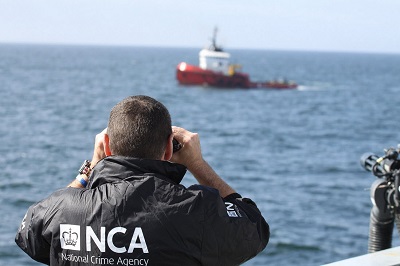 "This is a potentially significant seizure of illegal drugs, only made possible by the co-operation between ourselves, Border Force, the Royal Navy, French Customs and our other international partners.

"The exact amount of cocaine on board is yet to be determined and the search is likely to continue for some time. The ongoing NCA investigation is being supported by Police Scotland."

MV Hamal is registered in the Marshall Islands and owned by a Ukrainian company.