The Coast Guard Cuter Mohawk returned to her home base in Key West on Saturday, bearing a haul of about $400 million worth of cocaine.

On the Mohawk's most recent patrol in the eastern Pacific, her crew intercepted 14 vessels, arrested over 40 suspected smugglers and confiscated about 12,000 kilos of cocaine. In one surge of activity, the cutter intercepted four boats in one day. Mohawk had support from multiple partners through Joint Interagency Task Force South, including foreign military and law enforcement agencies.

The Coast Guard confiscates a massive quantity of cocaine in enforcement actions off the Pacific coast of South and Central America. Overall, last year was the agency's busiest ever for fighting drug-smuggling at sea, with $5.6 billion worth of cocaine (190 tonnes) taken off the market and 465 suspects referred for prosecution. The effort is so successful that photos of cocaine bales on deck have become almost routine: among other patrol results, East and West Coast-based cutters landed 26 tonnes in December; 18 tonnes in October; and 16 tonnes last March. 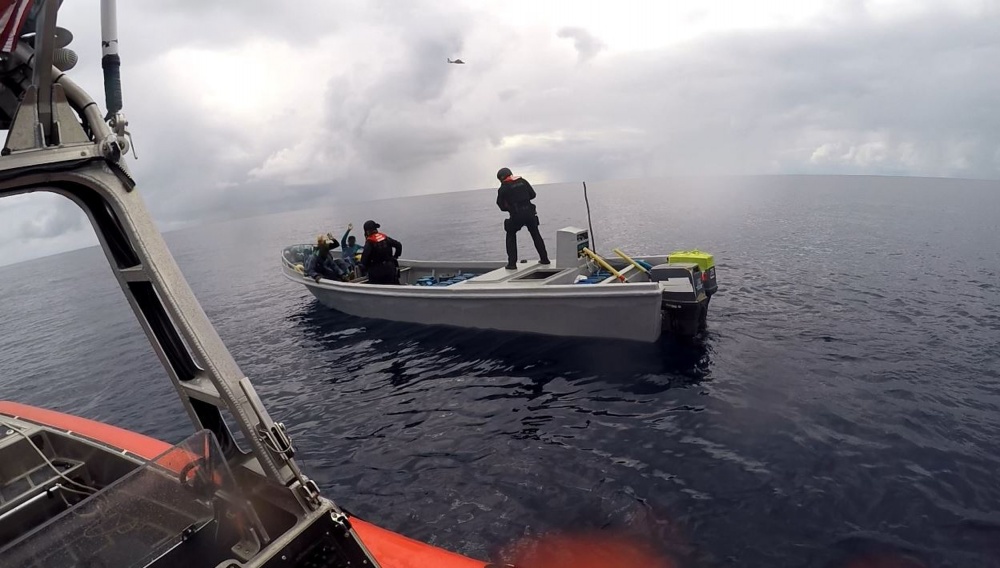 A boarding team from the Mohawk intercepts suspected smugglers (USCG)

Coast Guard Commandant Adm. Paul Zukunft argues that the chronically underfunded agency could do much more if it had more resources. Last year, he told an audience at the National Defense University that the USCG is aware of about 80 percent of all drug smuggling at sea, but “we can only act on about 20 percent of that because of the resource constraints we have. We’re giving 60 percent of what we know, literally, a free pass.” The USCG suggests that this translates to about 600 maritime drug shipments that pass by unchallenged every year.

While the Coast Guard avoided a proposed budget cut this year – thanks in part to a high-level intervention by members of Congress – the Trump administration's current budget proposal would keep the agency's funding flat. The proposed budget “sustains current funding levels" at the USCG – levels that are too low to maintain optimum readiness, the agency says.

“Where we’ve seen the most pain is we’ve deferred a lot of our shore maintenance,” Adm. Zukunft said, in recent comments to the Defense Writers’ Group. “We have a lot of our crew who are out there, if they’re not out doing operations . . . they’re patching roofs.”

Fincantieri delivered the new cruise ship the Silver Moon to Silversea Cruises, one of the brands owned by the Royal Caribbean Group. Built at the shipyard in Ancona, Italy, it is the second cruise ship that Fincantieri has completed since resuming operations after work was suspended in the spring due to Italy’s effort to mitigate the spread of the coronavirus.  At 40,700 gross tons, the Silver Moon is the second of three sister ships Fincantieri is building for Silversea. The...

On Friday, Israel's Ministry of Environmental Protection responded to a leak at the marine terminal of the Eilat-Ashkelon Pipeline. According to the agency, a spill of several cubic meters of light crude oil was released when an "emergency detachment accessory" of the terminal malfunctioned.  The pipeline operator's response team sealed the leak and treated the spill with dispersants. Though the site of the spill occurred about three kilometers offshore, the ministry requested a shutdown of the desalination plant in Ashkelon...