The six fishing vessels of the Fu Yuan Yu fleet are now in China and the final investigation into their alleged fisheries crimes is now in underway by Chinese authorities.

Over the last three months, environmental organization Sea Shepherd has provided the authorities with evidence relating to the fleet’s engagement in illegal fishing activities that the organization believes violates 11 different International regulations and Chinese law.

Sea Shepherd has offered to hand over evidence including four kilometers (2.5 miles) of driftnet, marking beacons, physical sightings, in addition to eye-witnesses, photographs and log-book entries, to the Chinese authorities. However, the offer has been turned down by the authorities who have instead decided to undertake a private investigation.

Campaign leader Siddharth Chakravarty said, “The evidence on board the Steve Irwin forms the most crucial part of the upcoming investigation. Given that the Chinese authorities are choosing to proceed without the evidence, I can only hope that the electronic submissions made to the authorities over the past three months have provided them with sufficient evidence to successfully conduct the investigation and find the perpetrators of these fisheries crimes guilty.”

The presence of the fleet first appeared via a blog entry made by Skytruth, an organisation that maps fishing activity using satellite Automatic Identification System (AIS). The blog entry mentioned a fleet of vessels displaying unusual behaviour in the South Indian Ocean. The Steve Irwin acted on this information when it departed from Fremantle, Western Australia, on Janaury 18, 2016.

A week later, when the Steve Irwin intercepted the vessels, they turned out to be a fleet of six vessels fishing in the high seas of the South Indian Ocean. The vessels, registered to China, were determined to be using large-scale pelagic driftnets, a type of fishing gear banned by a United Nations moratorium in 1992. The crew of the Steve Irwin documented the activities of the vessels and confiscated a four kilometer section of their gear, in which the bodies of 321 animals were recorded. The catch comprised mainly of blue sharks but also numerous non-target species of smaller pelagic fish, critically endangered Bluefin tuna, dolphins and seals.

Sea Shepherd determined that the fleet of vessels had been operating in the South Indian Ocean since September 2015. In mid-January, 2016, the fleet was met by a transhipping vessel, the Liao Chang Yu Yun 088, which transferred the catch from the vessels before heading back to the port of Fuzhou, China.

After the first interception and evidence submission by Sea Shepherd, the AIS beacons of the vessels began to go dark. However, one solitary beacon kept transmitting from the Fu Yuan Yu 076 which showed the fleet moving north before settling on the western edge of the Ninety East Ridge in the North Indian Ocean.

On March 13, 2016, the Steve Irwin once again intercepted the fleet and chased them from the North Indian Ocean through the Malacca Straits and into the South China Sea. During the chase, the Steve Irwin crew documented actions indicative of destroying evidence of the use of driftnets.

The crew of the Steve Irwin maintained a vigil for three days outside the port of Zhuhai, where the Fu Yuan Yu 076 was seen entering on March 30. The vessel has been reported to the Chinese authorities and is now within their jurisdiction for further legal action. 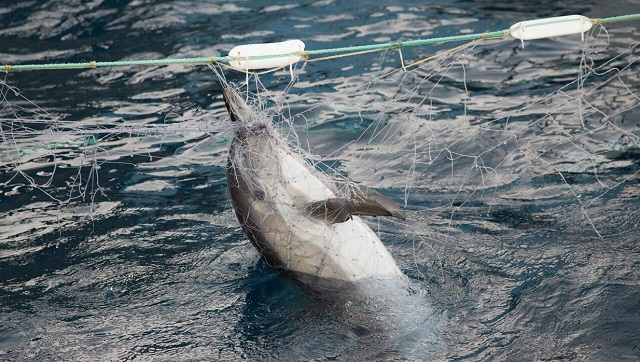