China's Hudong-Zhonghua shipyard and classification society DNV GL have agreed a joint development project for a new 270,000 cubic meter LNG carrier – the largest ever ship of this type. 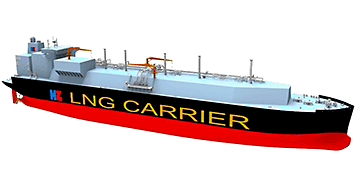 China's LNG imports have been growing rapidly. The nation imported 37.8 million tons of LNG in 2017, and this jumped to more than 54 million tons in 2018, an increase of 42 percent. In light of the country’s “protecting blue sky” campaign, it is forecast that the demand for LNG in China will continue to grow at a high level, and it is expected to exceed 100 million tons by 2030. Shanghai alone imported a record 600 million cubic meters of LNG in January 2019, requiring six 170,000 cubic meter capacity vessels.