China completed the first conversion project of an LNG gas carrier into an LNG bunker vessel. The Hai Yang Shi You 301 (16,250 dwt) becomes according to Chinese media reports the largest LNG bunkering vessel and the first in China to support the broader international ocean-going ship market.

Guangzhou Shipbuilding International (GSI), a division of China State Shipbuilding Corporation (CSSC), undertook the conversion which lasted approximately 80 days. A former gas carrier, built in 2015 and according to Chinese media was operating transporting LNG in China’s coastal regions. The ship had the capacity to transport 30,000 cubic meters of LNG.

The vessel, which is 605 feet long, was delivered to the shipyard at the beginning of August 2022, to begin the conversion. According to CNOOC Energy Technology & Services which will be operating the Hai Yang Shi You 301, the renovation project included adding cryogenic units, gas combustion devices, front bunkering stations, reliquefication systems, and other equipment for LNG bunkering operations. They also altered the mooring equipment and added anti-collision capabilities necessary to operate as a bunkering vessel.

The vessel now has the capability to conduct ship-to-ship transfers with a fueling capacity of 1,650 cubic meters of LNG per hour. The Hai Yang Shi You 301 will be operated by CNOOC from a base in the Nansha district of Guangzhou. CNOOC reports it will be fueling large, ocean-going containerships, ore carriers, crude tankers, and Ro-Ros. 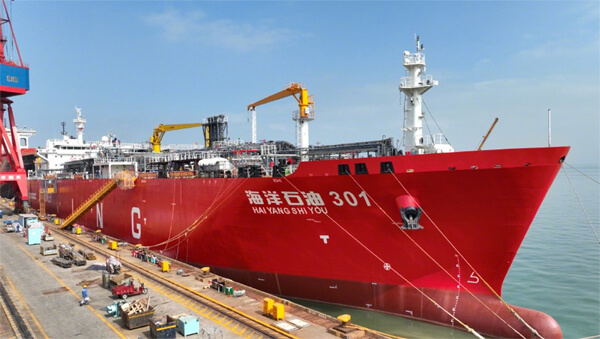 The conversion was completed in approximately 80 days (GSI)

Previously, Avenir had reported that its 20,000 cbm LNG bunker vessels were the largest by capacity. The newbuilds were built in China for the company with the first vessel introduced in 2021. They surpassed the Gas Agility, operated by TOTAL in Northern Europe, which claimed the title of the largest LNG bunker vessel with a capacity of 18,600cbm.

DNV’s Alternative Fuel Insights database reports that there are currently 40 bunker vessels in operation to service the fleet of primarily LNG-fuel dual vessels emerging using alternatives. They expect in the next three years that the fleet will increase by 50 percent with 20 additional bunker vessels on order. They also report that another 17 are believed to be under discussion.

While gas carriers are in demand for the LNG export market, conversion of some of the vessels might also provide a quicker solution to expanding the LNG bunker fleet to meet the growing demand as more ocean-going carriers build vessels designed to operate on LNG. DNV reports that LNG-fueled vessels are expected to more than double from the current 323 in service to over 800 by 2025.