China has overtaken the U.S. as the world’s wealthiest country measured by the value of its built environment according to the latest Global Built Asset Wealth Index published by Arcadis, a design and consultancy firm for natural and built assets.

The index calculates the value of all the buildings and infrastructure contributing to economic productivity in 32 countries, which collectively make up 87 percent of global GDP.

For the first time, built asset wealth in the U.S. no longer leads the world. With wealth of $36.8 trillion, the U.S. now trails China at $47.6 trillion. The U.S. built asset stock is largely unchanged in the past two years, while, since 2000, China has invested $33 trillion in its built assets, a total exceeding all other economies combined. The growth is evidence of China’s unprecedented level of investment in its infrastructure – nine percent of GDP – which dwarfs global competitors like the U.S., which currently invests just two percent of GDP.

Tom Morgan, vice president, head of business advisory, North America at Arcadis explains: “A prosperous society is underpinned by a well-developed built environment that meets the needs of its people and economy. Therefore, a strategically planned, highly developed and well maintained built environment is critical to the economic and social success of a nation.

“Developed economies have experienced a long-term stagnation and decline of their built asset stock, as aging infrastructure falls into disrepair and investment fails to keep up. This decline puts even more urgency on public owners to find creative ways to attract finance, make smarter decisions regarding the maintenance of existing assets and to maximize every dollar spent – the whole asset lifecycle must be considered to meet society’s needs.”

Morgan continues: “China’s ranking this year marks a profound change in the global league table of the world’s wealthiest built asset nations. However, with so much global uncertainty from financial imbalances, unprecedented currency volatility and crashing commodity prices, even China and its fast-growth neighbors will need a renewed focus on quality over quantity.”

The Index notes that while the U.S. built asset wealth embedded in real estate has demonstrated solid long-term growth, public infrastructure has not seen the consistent funding and policy needed to build investor confidence in such long term projects. In addition, the report notes that the U.S. needs to find ways to maintain the integrity and service levels of its aging asset base for less money.

The Global Built Asset Wealth Index shows a dramatic shift of wealth to emerging economies, such as Indonesia and Thailand, with the traditional economic superpowers – the G7 – showing a net decline in the value of their built assets since the 2013 report. Structural assets depreciate at a rate of around five percent per year, meaning this level of investment is the minimum required to maintain the status quo, a figure equating to $1.4 trillion in the U.S.

In Europe, the almost decade-long economic slowdown has also had the negative effect of holding back investment.

The top ten nations in the Arcadis Global Built Asset Wealth Index are: 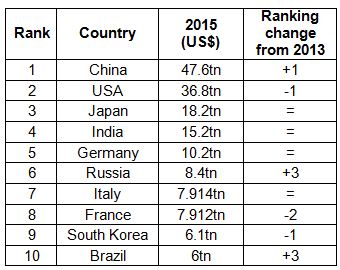 Decline seen in leading economies outside of China:

Globally, the largest depreciation of built assets was Japan, which has lost $4.6 trillion in built assets since 2000.

All European advanced nations underinvested between 2012 and 2014 resulting in an overall decline in infrastructure. However, as a proportion of total built asset stock, Germany’s decline of 21 percent is the most substantial over this period.

Other developed economies to have undergone significant net de-investment since 2000 include the Netherlands (-5 percent), the UK (-8.9 percent), France (-10.2 percent) and Russia (-18.7 percent), while the U.S. stock has remained largely constant (-0.8 percent).