The U.K. Merchant Navy Medal for Meritorious Service has been presented to Captain Belinda Bennett of Windstar Cruises, as “the first black female captain in the commercial cruise industry.” 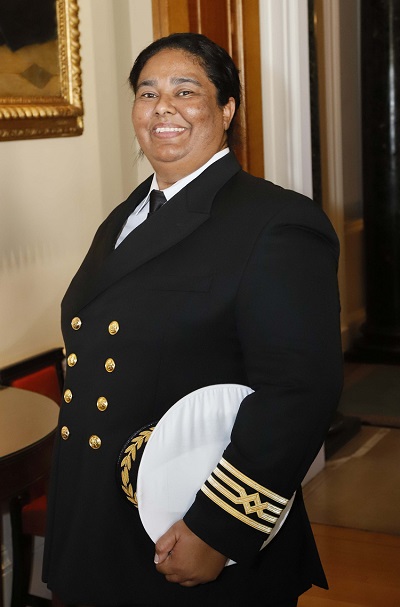 Bennett was given the award for services to the promotion of the maritime sector under the auspices of the U.K. Department for Transport and Maritime & Coastguard Agency. Her Royal Highness Princess Anne presented the Merchant Navy Medal honor, earned by those “who have gone above and beyond in their service to the maritime industry,” earlier this month at Trinity House in London.

First established in 2016, the awards marks the crucial contribution that members of the Merchant Navy make to maritime safety, seafarer welfare, training and the wider blue economy. Bennett is the second person at Windstar to receive the medal.

“It is an absolute honor to receive this medal. I hope that young people around the world will follow in my footsteps with hard work and dedication. I have to thank my family, friends and work colleagues for their support over the years, and every day we continue to learn. My career at sea has allowed me to see much of the world and its cultures of which I am thankful. This medal may be awarded to me but it belongs to all who have supported me over the last 24 years at sea,” said Bennett.

Bennett has been with Windstar Cruises for more than 13 years. In January 2016, she was named Master of MSY Wind Star, a four-masted sailing ship accommodating 148 guests, 101 crew, with four decks and a gross tonnage of 5,307 GRT.

Hailing originally from one of the most remote islands in the world, St. Helena – a part of the British Overseas Territory, Bennett became immersed with life at sea, having started as a deck cadet at age 17 on her home island ship the RMS St. Helena – a cargo ship that transports vital supplies to the remote island from the African coast. Just four years later, she had climbed the ranks to Third Officer and ultimately stayed on board for an additional five years, until departing in 2003 as second officer. Following a brief stretch as chief officer for private charter yacht SS Delphine, and Isle of Man Steam Packet ferries, Bennett joined Windstar Cruises as Second Officer at the Port of Monaco in September 2005. Bennett has worked on a variety of Windstar ships over her 13-year career progressing to chief officer and now captain with the small ship line.

“We are beyond proud of Captain Bennett not only for what she represents to the cruise industry but also her determination and perseverance in the very competitive and vital maritime industry. Belinda is a great role model for our junior officers and cadets. We are happy for her success and the inspiration that is to be gained by her story,” said Windstar Vice President of Operations Christopher Prelog.