Working with the U.S. Coast Guard and Woods Hole Oceanographic Institution (WHOI), MBARI engineers outfitted an AUV with fluorometers that can detect oil in water. They then tested the system by simulating an oil spill using non-toxic, biodegradable dye. After instruments on the AUV detected the plume, the AUV continued on its path, measuring the concentrations of dye within the plume and recording the areas of highest intensity. When the AUV crossed the outer edge of the plume, it automatically turned around and headed back toward the plume. By doing this repeatedly, it was able to track the plume as it drifted through the water for several hours.

The Coast Guard is particularly interested in testing AUVs that can find and track oil spills under ice, and the test involved using instruments that allow the AUV to navigate beneath sea ice.

The research was funded by a grant awarded by the U.S. Department of Homeland Security to Jim Bellingham, director of the Center for Marine Robotics at WHOI. In his previous position as an engineer at MBARI, Bellingham conceptualized and helped design the first AUV.

The present study builds on a previous MBARI effort to track oil in the deep waters of the Gulf of Mexico following the Deepwater Horizon oil spill, using one of MBARI’s larger Dorado-class AUVs.

In August this year, MBARI and the National Oceanographic and Atmospheric Administration (NOAA)  tested one of the AUVs for mapping toxic algae blooms. The AUV swam around Lake Erie measuring the amount of microcystin and algae in the water and sent its findings back to shore in real time.

For the last eight years, MBARI’s scientists and engineers have been building long-range AUVs and using them to study microscopic algae and ocean chemistry off the California coast. In 2018, they built a new model that carries a robotic biochemistry lab called a third-generation Environmental Sample Processor (3G ESP). While the AUV moves through the water the 3G ESP collects samples of water, filters them and then processes the samples to detect microscopic organisms or toxins such as microcystin. After analyzing the samples, the 3G ESP can send its findings to scientists on shore via satellite link. 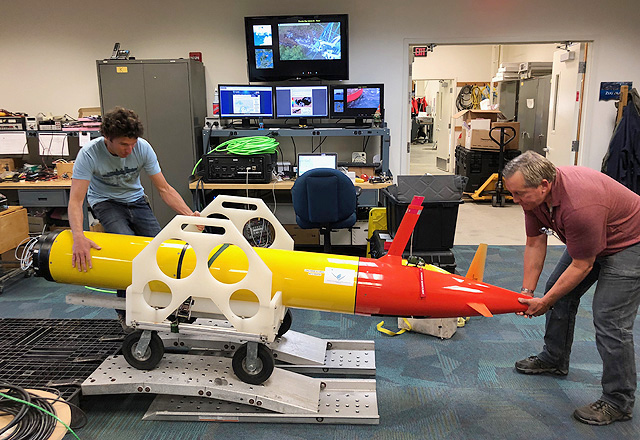