A vessel chartered by the Australian Antarctic Division to run crewing and supply missions to bases in the Antarctic is diverting to the closest port after a fire disabled one of the vessel’s engine rooms while it was sailing deep in the Southern Ocean. The crew and Antarctic personnel aboard are all reported to be safe and the vessel is making headway at reduced speed to “avoid some challenging Southern Ocean weather.”

Australian Antarctic Division General Manager of Operations and Safety, Charlton Clark, said the captain of MPV Everest, a 476-foot-long multipurpose offshore construction vessel, has decided to head for the closest port. “MPV Everest is about 1,400 nautical miles south of Fremantle, which is about 5 to 7 days transit in good weather,” Clark said. “The Australian Antarctic Division is really focused on getting our expeditioners home safe and well, as soon as possible.”

The 29,920 gross ton ship, which has an ice-strengthened hull, was sailing back to Australia at the end of a two-month voyage to Antarctica during which she resupplied the bases and transferred personnel from Australia’s Davis and Mawson research stations. “There’s 72 Antarctic expeditioners on board, some of whom have been in Antarctica for a year and a half,” said Australian Antarctic Division’s organizational psychologist Maree Riley. The vessel also has a crew of 37. 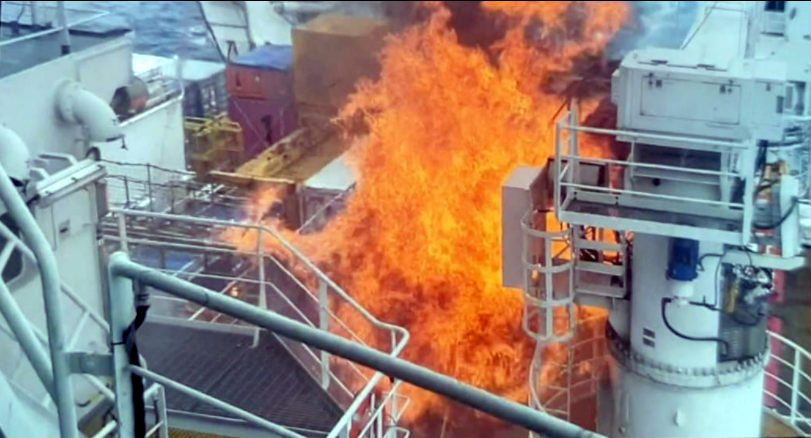 The fire was reported just after 2:00 p.m. on April 5 four days after the vessel began its return voyage heading to Hobart, Australia on the island of Tasmania. The fire engulfed the port engine room and flames could be seen shooting out on the deck of the vessel. The fire was contained and extinguished by the fire suppression systems. It was reported as being extinguished by about 5:40 p.m. after causing extensive damage to one of the vessel’s two engine rooms and destroying two inflatable rubber boats stored on deck.

At the time of the fire, the vessel was approximately 1,700 nautical miles south of Perth, Australia five days into a voyage that was expected to last 14 days depending on weather conditions. Since the fire, the vessel has been running on its starboard engine room at a reduced speed of 8 to 9 knots. Its maximum speed is 15 knots or 12 knots when operating at economy speed.

Owned by a Dutch company, Marine Construction Services, the vessel was selected in part because it has an ice-strengthened hull with the ability to break sea ice up to one meter thick. The vessel had departed Hobart on February 3 but encountered thick sea ice off the Mawson coast in Antarctica forcing the crew to undertake the changeover of personnel and resupply entirely by helicopter. They were flying nearly 75 miles transporting nearly three tons of material on each flight. In total, 22 tons of essential and priority cargo was transferred to the station to supply the teams for the next year.

“The team building the helicopter loads were magicians, filling every nook and cranny, whilst ensuring the full weight limit is reached,” said voyage leader Andy Cianchi.

The MPV Everest is operating as a replacement for an older vessel the RSV Aurora Australis that had recently completed a 30-year contract to operate the supply missions. Australia is building a new icebreaker, the RSV Nuyina, but the vessel has been delayed in construction.

“This was an extremely serious incident,” said the Maritime Union of Australia in a statement. The union, which had called for continuing to operate the Australian vessel until the replacement is ready, is accusing the AAD of downplaying the magnitude of the fire. “Thankfully, there are no reports of injuries among the 109 crew and expeditioners on board, but a fire of this scale on a vessel just days into a voyage from remote research stations in Antarctica is extremely alarming,” the MUA said.

The MPV Everest undertook its first supply mission carrying 680 tons of supplies to Australia’s Casey Station. That voyage had begun on January 10 from Hobart. On the return voyage after completing the resupplying operation, the MPV Everest also experienced a small fire in the ship’s battery room. The fire was contained to the room located on a deck above the bridge and was put out with a hand-held extinguisher.

The Australian Maritime Safety Authority (AMSA) Response Center is reportedly monitoring the transit of the MPV Everest and in regular communication with the vessel. They report that the safety regulators and the ship’s owner plan to conduct a full investigation into the cause of the engine room fire. The Australian Transport Safety Bureau also reports that it has opened an investigation.