A team in the E.U. is building a zero emission air supported commuter ferry capable of a speed of 30 knots. The ferry will be powered by a lithium titanate battery system, an alternative to lithium ion batteries that are faster to charge.

Partly funded by the European Commission in a project called BB GREEN, a full size demonstrator of the new battery-driven commuter ferry is expected to be launched late this summer. 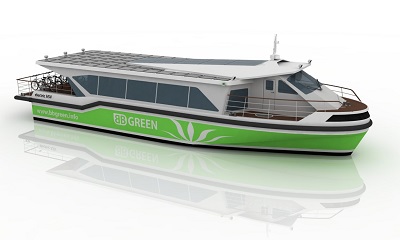 An eight-partner-strong team, headed by SES Europe AS (a subsidiary of Effect Ships International), has developed the new vessel concept. Provided funding can be raised, demonstrations with the new 22m ferry will take place in several cities around Europe.  The partners’ goal is to create a technological shift in waterborne commuter transport, as the variations of the design can be configured for up to 100 passengers.

The BB GREEN fast ferry will be featuring two permanent magnet motors with a continuous rating of 300kW, operating at a voltage of 720 V DC for propulsion and one motor delivering up to 80kW for the lift fan system. In a commercial application the vessel will use a 400kWh battery lithium titanate battery developed by project partner Emrol from Belgium, giving the vessel a range been recharging of the battery of approximately 14 nautical miles when operated at high speed. For the demonstrator a half size capacity battery will be fitted.

The battery technology was chosen because it allows a very high number of recharging cycles (up to 25.000 cycles even when 80 percent of the total energy storage capacity is used before recharging) and fast recharge (in less than half hour). This makes the new battery modules particularly suitable for heavy duty commercial use.

The vessel will use battery electric drivelines from Echandia Marine Sweden, who also will provide a new supercharger system for fast recharging of the battery. Echandia is the system integrator partner in the project.

The vessel, with a 400 kWh battery, 30 knots cruise speed and a return route of up to 12-14 nautical miles, will be able to operate on an hourly schedule. Assuming 10 or 12 hours of operation per day the whole year around, the battery pack is expected to last for at least five years.

The propulsion system for the ferry will be contra rotating pod propulsors as this system offers market leading high efficiency over a wide spectrum of speeds in combination with excellent maneuvering and handling of the vessel, says Ulf Tudem, General Manager of Effect Ships International. 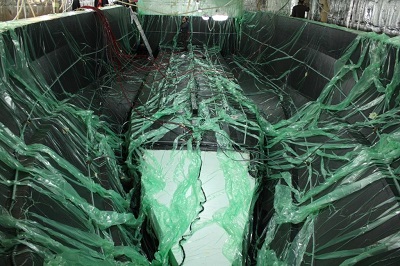 The full-size concept demonstrator vessel is now under construction by project partners BJB/ Latitude Yachts at their yard in Latvia. Last year BJB won a European tender competition to build the demonstrator . The yard is now constructing the hull and superstructure from carbon composite sandwich and Divinycell core materials; combined with vacuum infusion technique and Vinylester resin. The resulting structures are strong, light and durable, says Tudem.

Diab AS has been responsible for the composite engineering and is supplying the materials.
DIAB has assisted and supervised the construction yard throughout the lay-up and infusion of the first vessel. According to DIAB’s representative Bjorn Abrahamsen, the main hull infusion process went fully according to plan, to the great satisfaction of the yard as well as the project coordinator – Tor Livgard from Effect Ships International.

“By means of a proprietary lift fan system, almost 80 percent of the vessel’s weight is supported on a cushion of pressurized air offering up to 40 percent reduction in resistance and reduced wake wash,” says Tudem.

ASV and carbon construction are complementary technologies, he says, because reduced operational weight will contribute to reduced energy consumption and lifetime cost.

Studio Sculli in Italy has been responsible for the topside and design of the demonstrator vessel. Sculli emphasizes that several alternative topside designs will be available on request to match local requirements and individual operators’ tastes.

The BB GREEN project end user partner is Aqualiner / Waterbus from the Netherlands. The company is already operating several commuter ferries and has joined the BB GREEN project as they predict fast battery electric ferries will be the way to go in the future.

A market study conducted in the project concluded there is a large number of current and potential routes and route networks for BB GREEN type of vessels around the coasts and on inland waterways in Europe.

“The project partners are of the opinion that a key to convince the market to go zero emission with the BB GREEN concept is to get the full size demonstrator in operation,” says Tudem. “We invite operators and politicians engaged in commuter transport handling to come on board for trials.”

Lloyds Register has been in charge of the classification and safety issues for BB GREEN.
Jotun from Sandefjord, Norway will provide the paint and the antifouling, which has already been successfully tested by Effect Ships International on a previously built ASV test vessel.