After 24 days of work, the Golden Ray wreck removal team has paused operations on their third cut through the hull in order to carry out additional maintenance on the chain-cutting rig.

The vessel's bow and stern have already been cut off with a stud-link chain and shipped by barge to a scrapyard in Louisiana. The first cut took 20 days to complete, and after revisions to the cutting rig, the salvors hoped to bring down the time needed to remove each additional section. The second cut (for the bow) took just eight days, finishing on January 2.

On January 26, after extensive pre-drilling and rigging operations, salvors began their third cut through the hull of the Golden Ray. However, the work has gone more slowly on this round of cutting, and the pause announced on Thursday is the second time that salvors have had to call a brief halt. On February 3, as the cut was reaching the halfway mark, a connecting link failed and the chain fell down into the cut in the wreck's topsides. No injuries occurred and no other equipment was damaged, and the rig was set up again and operating by the following day.

This time, the heavy lift barge VB 10000 has been temporarily relocated over a deck barge to support maintenance on the cutting rig. The work includes "wire replacement in the rigging system," according to the response command.

The third cut passes through the engine room, and it entails a heightened risk of pollutant release; the environmental protection barrier installed around the work site is intended to contain as much oil and debris from the vessel as possible. A fleet of spill response boats and shore cleanup teams are on hand as needed, and plastic car parts (from the ro/ro's automotive cargo) and minor fuel oil releases have been recovered from the water and from local beaches.

Meanwhile, a separate team is working on the forward section of the ship, removing damaged cars from the hull with a grapple to lighten the load. So far, 87 wrecked autos have been pulled out and landed on a barge for recycling. Divers are also continuing work on pre-cutting the hull for later sections in the sequence. 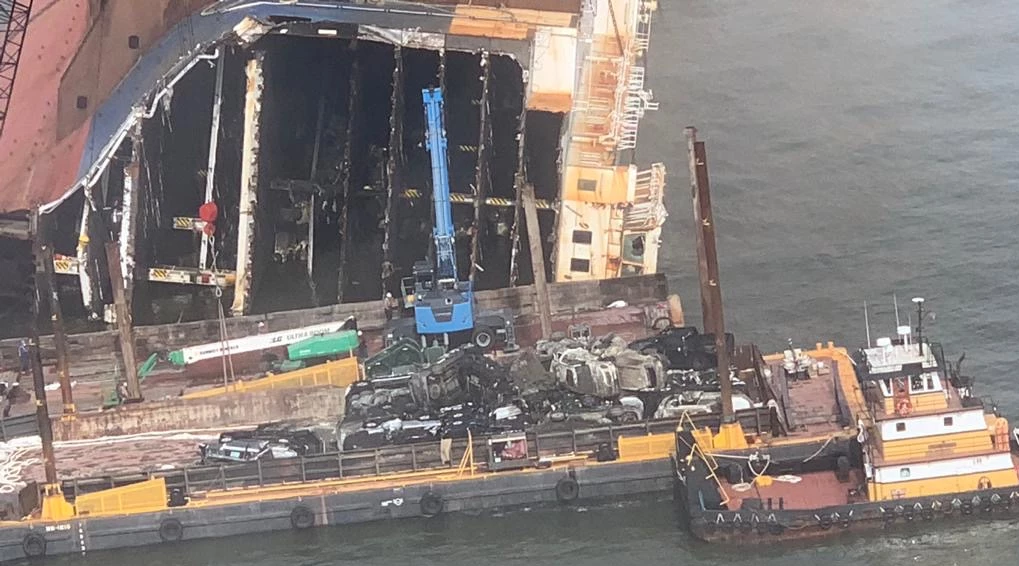 The Golden Ray went aground and partially capsized in Georgia's St. Simons Sound on September 7, 2019. During an outbound transit in calm conditions, a routine turn to starboard turned into a runaway maneuver, ending with the vessel aground and resting on her side. Lt. Ian Oviatt, a staff engineer at the Coast Guard Marine Safety Center, told the NTSB that the vessel had taken on too little ballast for her cargo load. “The cause of the vessel capsizing was lack of righting energy due to the way the vessel was loaded,” Oviatt told an NTSB panel last September. “The vessel could have taken on additional ballast to be in compliance.”