The National Oceanic and Atmospheric Administration (NOAA) is predicting a busy Atlantic hurricane season in 2020 in its just release forecasts.

NOAA’s Climate Prediction Center, a division of the National Weather Service is forecasting a likely range of 13 to 19 named storms (winds of 39 mph or higher), of which 6 to 10 could become hurricanes (winds of 74 mph or higher).  The forecast includes 3 to 6 major hurricanes (category 3, 4 or 5; with winds of 111 mph or higher). NOAA said that it provides these ranges with a 70 percent confidence.

According to NOAA, an average Atlantic hurricane season produces 12 named storms, of which 6 become hurricanes, including 3 major hurricanes.

“NOAA’s analysis of current and seasonal atmospheric conditions reveals a recipe for an active Atlantic hurricane season this year,” said Neil Jacobs, Ph.D., acting NOAA administrator. “Our forecasters, coupled with upgrades to our computer models and observing technologies, will provide accurate and timely forecasts to protect life and property.”

NOAA explained that a combination of several climate factors is driving the strong likelihood for above-normal activity in the Atlantic this year. El Nino, a condition of the warm ocean water that develops in the central and east-central equatorial Pacific, are expected to either remain neutral or to trend toward La Nina, meaning there will not be an El Nino present to suppress hurricane activity.

Other factors increasing the likelihood for an above-normal Atlantic hurricane season include warmer-than-average sea surface temperatures in the tropical Atlantic Ocean and Caribbean Sea, coupled with reduced vertical wind shear, weaker tropical Atlantic trade winds, and an enhanced west African monsoon. According to NOAA, similar conditions have been producing more active seasons since 1995. 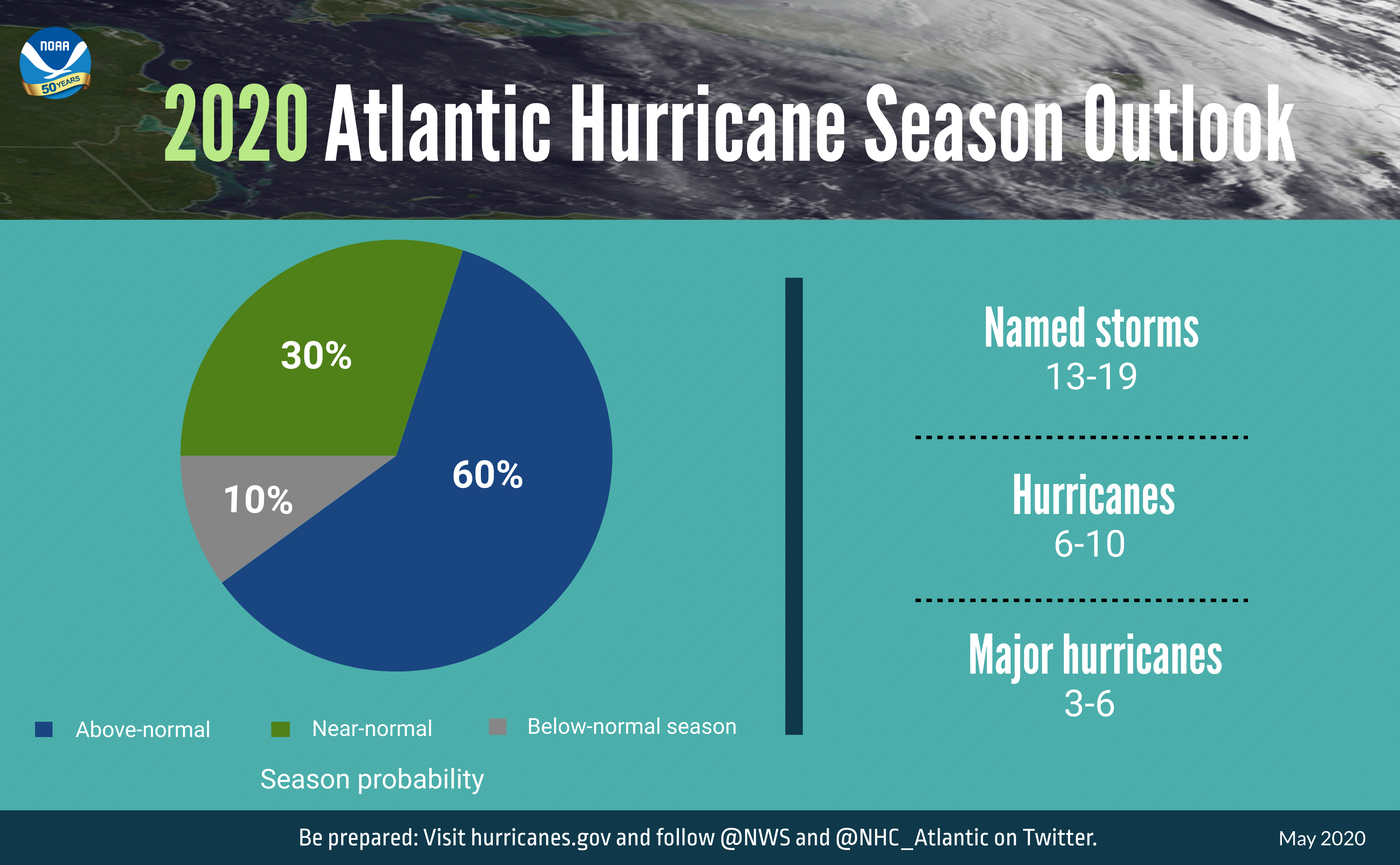 NOAA will be launching upgrades to products and tools that will further improve its critical services during the hurricane season. This will include the upgrade of the hurricane-specific forecast system and modeling programs that will incorporate new data from satellites and radar from NOAA’s coastal Doppler data network. As the hurricane season gets underway, NOAA explained that it will begin feeding data from the COSMIC-2 satellites, that provide data about air temperature, pressure and humidity in the tropical regions, into weather models to help track hurricane intensity and boost forecast accuracy.

Also during the 2020 hurricane season, NOAA and the U.S. Navy will deploy a fleet of autonomous diving hurricane gliders to observe conditions in the tropical Atlantic Ocean and Caribbean Sea in areas where hurricanes have historically traveled and intensified.

NOAA, highlighted though that the outlook is for overall seasonal activity and is not a landfall forecast.

The Climate Prediction Center will update the 2020 Atlantic seasonal outlook in August prior to the historical peak of the season.