The US Navy plans to deploy its first laser on a ship later this year, and it intends to test an electromagnetic rail gun prototype aboard a vessel within two years, reports AP.

The new technologies are cheaper than missiles, and because lasers run on electricity, they can be fired as long as there is power. They provide a measure of added safety to naval vessels as they don't involve the need to carry propellants and explosives onboard. 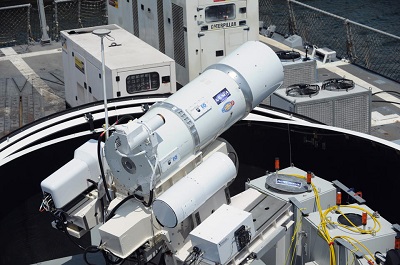 The plan is to have a prototype on USS Ponse this summer where the laser gun will be operated by a single sailor. The laser directs an invisible beam of energy that can burn through a target or destroy sensitive electronics. It is designed to target aerial drones, speed boats and swarm boats, all potential threats to warships in the Persian Gulf, where the Ponce, a floating staging base, is set to be deployed.

The navy stated last year that their conservative estimates are that a shot of directed energy from the laser costs under $1. Chief of Naval Research Rear Adm. Matthew Klunder said: "Compare that to the hundreds of thousands of dollars it costs to fire a missile, and you can begin to see the merits of this capability."

The Office of Naval Research and Naval Sea Systems Command recently performed demonstrations of high-energy lasers aboard a moving surface combatant ship, as well as against remotely piloted aircraft. Through careful planning of such demonstrations and by leveraging investments made through other Department of Defense agencies, researchers have been able to increase the ruggedness, power and beam quality of lasers, more than doubling the range of the weapons. 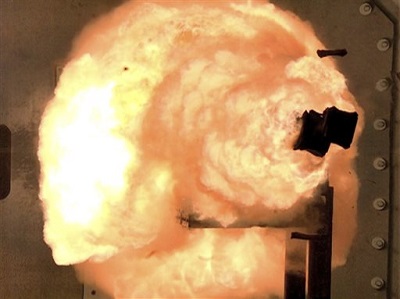 Rail guns, which have been tested on land in Virginia, fire a projectile at six or seven times the speed of sound, and these could replace or supplement other long distance guns.

AP says that rail guns require a lot of energy to launch projectiles, and the Navy's new destroyer, the Zumwalt, still under construction at Bath Iron Works in Maine, is the only ship with enough electric power. However, engineers are currently working on a battery system that could store enough energy to allow a rail gun to be retrofitted to other vessels.

Video of the demonstration of the high-energy laser aboard a moving surface combatant ship and against remotely piloted aircraft can be seen here.

The American Association of Port Authorities (AAPA) has been chosen by the U.S. Department of Labor (USDOL) as among 28 U.S. entities to administer nearly $100 million being awarded through the Apprenticeship: Closing the Skills Gap grant program. Grant awards ranged from $500,000 to $6 million and for AAPA’s $5,888,738 they will be used for the building and expansion of apprenticeship programs within the transportation and maritime industry. The grant places a heavy emphasis on private sector partnerships, with a...

The American Association of Port Authorities (AAPA) has chosen Assistant Secretary of the Army Rickey “R.D.” James to receive the 2020 Port Person of the Year for his dedication in leading the U.S. Army Corps of Engineers (Corps) to streamline processes for maintaining and improving America’s civil works infrastructure, including its deep-draft shipping channels.  “After accepting the nomination to serve as Assistant Secretary of the Army, Mr. James committed to ‘move dirt,’ setting in motion his vision to build and...