In the early hours of 18 January 2014 a 75,000-ton tanker, the MT Kerala, vanished off the coast of Angola. A sophisticated pirate gang hijacked the Greek-owned vessel, disabling its identifications system and communication equipment, and painting over its identifying markers.

More than a week later and 1,300 miles away, the hijackers released Kerala off the coast of Nigeria, after offloading 12,270 tons of its diesel cargo to other ships.

The Kerala hijacking marks the southernmost expansion of Nigeria’s pirate gangs, but represents only one subset of piracy in the Gulf of Guinea. The waters of Gabon and Equatorial Guinea each suffered pirate attacks in the first week of 2014.

Off Nigeria—the epicenter of western Africa piracy—there have been at least 12 attacks against various types of vessels this year, resulting in multiple kidnappings. Within the swampy maze of the Niger Delta, militants-cum-pirates have robbed passenger vessels, kidnapped oil workers and ambushed security-force patrols.

This level of organized piracy—as distinguished from opportunistic robberies against berthed and anchored vessels—can be sorted into two different categories: tanker hijackings for product theft and maritime kidnapping for ransom.

Both forms are intertwined with the regional oil industry, but their distinct perpetrators, targets, and trend lines warrant separate looks. First, tanker hijackings. 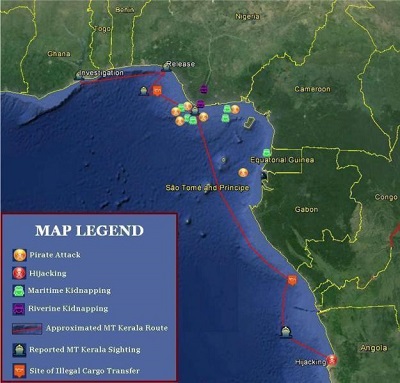 In Search of Black Gold

Tanker hijackings aimed at large-scale cargo theft first appeared off Benin in December 2010 and spread to the waters of Nigeria, Togo, Côte d’Ivoire, Gabon, and Angola in subsequent years. This western Nigeria-based criminal enterprise is highly organized and intelligence driven, allegedly with the involvement of high-powered political, business, and military patrons. As an suspected hijacker captured near Lagos explained:

“We do not work in isolation. We have a network of ministries’ workers. What they do is to give us information on the location and content of the vessels to be hijacked. Once we complete the assignment, we would inform the pointsmen who thereafter, contact the cabal that takes charge of the hijacked vessels. We usually meet at a designated point on the high sea, from where they would offload the contents from the hijacked vessels and thereafter, deposit them in various oil facilities for distribution by oil marketers.”

The pirates who hijacked Kerala targeted the ship based on foreknowledge of its cargo, location and intended movements. Using a stolen tugboat as a “mother ship,” the hijackers made a multiday voyage all the way to a Luanda anchorage and then selected their target from some 30 other vessels in the area.

After hijacking the ship, the pirates sailed towards the Republic of Congo where they made their first sale of stolen diesel. The hijackers later made two more ship-to-ship transfers off the southwest coast of Nigeria before abandoning Kerala on 26 January.

If the pirates sold the diesel for half of its $10 million market price, they and their sponsors netted some $5 million in an operation that lasted just over a week.

The geographic scope of this particular crime demonstrates the expansive multinational network of informants and buyers hijack syndicates employ. While the leadership of the gangs is Nigerian, they are thought to recruit regionally, as indicated by the testimony of captured pirates and reports of pirates speaking both English and French during attacks.

A Product of the Environment

Nigeria produces some 2 million barrels of oil per day, but has the capacity to refine less than a fifth of that. Crude oil is exported to foreign refineries and then brought back into Nigeria and sold at government subsidized rates—a process that provides ample opportunity for corruption, theft, and piracy of all sorts.

The pirates’ hunting ground—the dense backlog of tankers waiting at anchorage across the region—is a product of this peculiar market. So too is the pervasive acceptance of black market petroleum—be it from illegal refineries in the Niger Delta, or illicit ship-to-ship transfers—that enables stolen cargos to be so quickly flipped.

The fact that MT Itri, a tanker hijacked by pirates off Abidjan, Côte d’Ivoire, in January 2013, was detained a year later for allegedly receiving stolen fuel from Kerala reveals how deeply intertwined piracy is with the West African petroleum black market.

Financial losses from tanker hijackings have been borne by regional states and the maritime and petroleum industries. Port authorities in Benin reported a 70 percent drop in maritime traffic after pirates snatched a dozen tankers from the country’s waters in 2010 and 2011. Underwriters from the Joint War Committee now include the littorals of Nigeria, Benin and Togo as high-risk areas where additional insurance premiums apply. Fears that Luanda might suffer a similar fate may have motivated the Angolan Navy to make an unsubstantiated claim Kerala’s crew had faked their pirate attack.

The Norwegian Maritime Authority has advised its members to implement the same anti-piracy security measures—such as vessel hardening, extra watch posts, and crew drilling—in Angolan waters that are mandatory off Nigeria, Benin, and Togo. Intertanko, the tanker industry’s leading trade association, has meanwhile revised its piracy clause to allow ship owners to wait further offshore from customary anchorages deemed unsafe, with the additional cost passed on to the charter company.

Heightened naval patrols and vessel security measures appear to be showing some success, as both the number of tanker attacks and successful hijackings have declined from a 2011 high. Prior to the taking of Kerala, there had not been a successful tanker hijacking reported in the Gulf of Guinea for over five months. 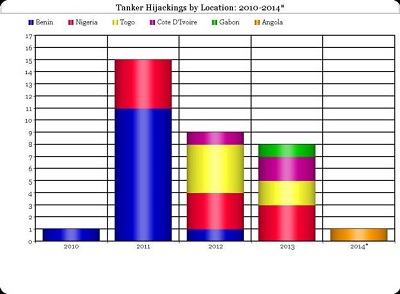 While maritime security has traditional been a low priority for West African armed forces, the spread of Nigerian piracy and its associated economic losses have prompted a flurry of regional naval acquisitions and international training and assistance programs. There was an increase in naval interventions in pirate attacks in 2013, with Nigerian, Togolese and visiting French naval forces all intercepting would-be tanker hijackings.

Vessel security and situational awareness has also improved as revised best management practices—such as the employment of local armed security, extra watch duty and the use of “citadel” safe rooms—become more widely applied.

Furthermore, there is evidence to suggest that the lucrative gains from tanker hijackings have inspired less organized and effective hijackers. There were at least two occasions in 2013 where pirates boarded tankers only to find that they were at ballast, indicating a lack of cargo intelligence. On Jan. 1, 2014, pirates boarded a gas carrier 55 nautical miles off Gabon, but, in an uncharacteristic move, retreated as soon as the crew raised an alarm. Opportunistic pirates, rather than organized criminal syndicates, are now responsible for 20 percent of tanker attacks, according to Nigerian sources reporting to regional security expert Dirk Steffen.

Naval patrols and vessel vigilance has partially succeeded in pushing tanker hijackers away from their old hunting grounds in the waters west of Lagos. The syndicates, it would appear, are conducting fewer, but more specifically focused, attacks against high-value targets off anchorages where piracy is not anticipated.

Given the infancy of the oil industry in the western Gulf of Guinea, the pirate gangs are likely to continue their trajectory towards the anchorages of established oil producing and refining states further south, threatening tankers off Gabon, Republic of Congo, and Angola. Opportunistic hijackers, meanwhile, will remain a risk for vessels operating close to shore off Togo, Benin, and western Nigeria.

While partners such as the United States and European Union have increased training and assistance support, there is no current indication that international naval operations will be mounted in the Gulf of Guinea similar to the Gulf of Aden. Foreign armed guards aren’t an importable panacea, as only local security forces are permitted in the territorial waters of West African states.

The Gulf of Guinea is not the Horn of Africa and tanker hijackings are not occurring in a vacuum. Rather these pirates are an offshore manifestation of oil sector criminality and cogs in a regional illicit fuel market.

With no end in sight, the targets of these attacks must adapt to an ever-evolving threat. As Kerala discovered, these pirates will strike when least expected and where help is a world away.

This is the first of a two-part series on piracy in West Africa by James Bridger. It originally appeared on USNI News.

After being broadly criticized by the cruise industry for the level of restrictions that it plans to impose on cruise ships as they resumed sailing for U.S. ports, the Centers for Disease Control and Prevention (CDC) updated its guidance on a few points. This came as a federal judge was hearing the pending lawsuit and application for an injunction, which if granted, could revoke the CDC’s orders and permit the cruise lines to resume sailing from U.S. ports. “These instructions reflect...