The International Union of Marine Insurance (IUMI) has announced that the year-over-year change of marine insurance premiums globally is a modest decline of -1.7 percent. Whereas in 2012, the market produced $34.8 billion in volume, in 2013, volume had decreased to $34.2 billion. Marine premiums remained stable in most of the world. This decline was virtually exclusively the result of declining Asia/Pacific premiums.

In 2013, the marine premium market was divided as follows: 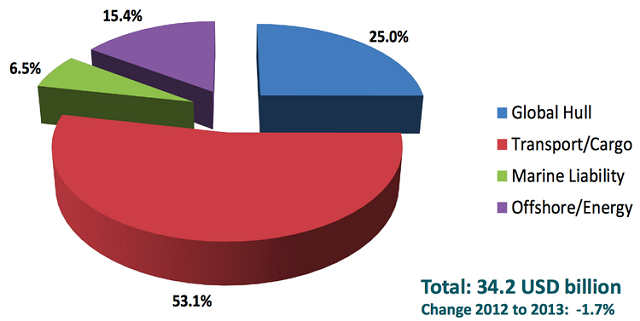 A number of factors can influence the cost of marine premiums, e.g. the size and value of the insured vessel, the value of the insured cargo, geopolitical risk, etc. "Marine premiums" are also a broad category, which include everything from actual total loss insurance (i.e. coverage for the event that the vessel sinks) to simple newbuilding risk insurance (i.e. coverage for the event that a ship under construction in a shipyard is damaged during that process).

For 2014, it is forecast that major losses (e.g. the cruise ship Costa Concordia) will reach a record low of 5 percent of total cost (vs. 31 percent in 2013 and 54 percent (!) in 2012). Indeed, claim frequency and total loss frequency appear to be starkly declining - a positive insurance trend. Repair costs for ships also appear to be stable or gradually decreasing.

One factor could be the influx of expensive newbuildings. As a percentage of the total insured portfolio, ships valued over $100 million peaked in 2014. The same applies to ships valued at over $300 million. Together, these two categories account for ca. 5.6 percent of the portfolio.

Although it is possible that ever-improving safety standards and technology will mitigate the risk of insuring such valuable assets, the latent risk of a mishap is that much more terrifying. A single Costa Concordia-style accident can have a huge impact on the bottom line. 2011, the year of the Costa Concordia disaster, was the first year since 2003 that the hull-gross ultimate loss ratio exceeded 80 percent, where 80 percent is seen as the marine premium break-even point.

On the other hand, apart from newbuildings, the value of renewals (i.e. policies that are renewed or extended for another term) are on the decline - this is due to the overall decline in value of shipping fleets worldwide both on account of overcapacity and the rapid obsolescence in particular of smaller ships which sometimes run on relatively higher costs: 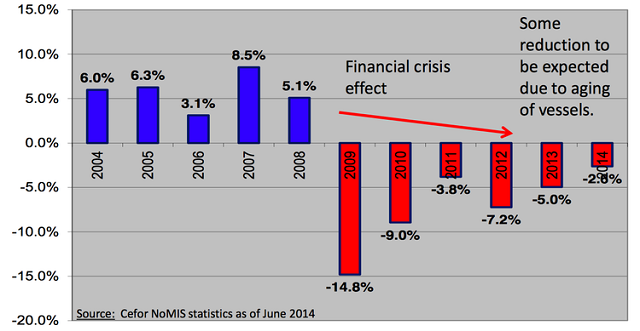 Hence, the market is polarizing as the world fleet continues to grow.