The architects were inspired by the World Bank prediction that the world population will grow to almost 10 billion in the next four decades. By 2050, the global demand for food is expected to be 60-70 percent higher than today. Scarcity of water and cultivable land are the main obstacles to meet the quantitative and qualitative shifts of the world’s demand. Agriculture is the human activity that relies most on the existing water resources, say the architects. 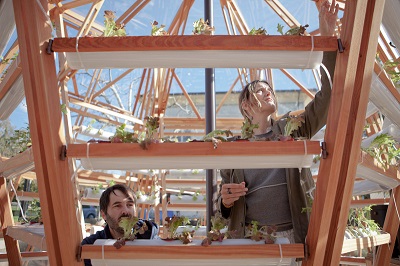 Jellyfish Barge is a floating agricultural greenhouse able to purify salt, brackish or polluted water using solar energy. It is built with low-cost technologies and simple materials, also appropriate to the self-construction paradigm.

It consists of a wooden base of about 70 square meters that floats on recycled plastic drums and supports a glass greenhouse for crop cultivation. Inside the greenhouse, a high-efficiency hydroponic cultivation method provides up to 70 percent of water savings compared to traditional hydroponic systems. 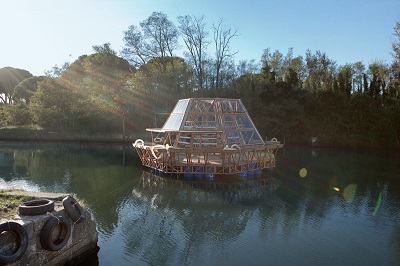 Required water is supplied by seven solar desalination units arranged around the perimeter that are able to produce up to 150 liters per day of clean fresh water from salt, brackish, or polluted water. Solar distillation is a natural phenomenon: in the seas, the sun’s energy evaporates water, which then falls as rain water. The solar desalination system of the Jellyfish Barge replicates this phenomenon on a smaller scale.

The barge design is modular, so a single element is completely autonomous, while various flanked barges create a stronger and more resilient system.