A drastic shift in the paradigm for selecting routes transiting sulfur emission control areas is nearly upon us. With fuel differential costs between IFO and Ultra Low Sulfur fuel on the order of USD 300 to 400 per ton, the methodology for voyage planning will enter a completely new realm as of January 1, 2015 when ECA zones have stricter regulations.

I.   The Evolution of SECA and ECA

II.   Approaching the Problem From a Cost Savings Perspective

As the 1.0% fuel consumption requirements came into force, AWT recognized that a solution was needed to address these changes. Therefore, AWT created an ECA voyage pre-plan for our clients to compare the following:

The data allows the operator to make tactical decisions with regard to overall time, distance and fuel consumption inside and outside of ECA zones. Using information provided by the client about basic fuel costs and hire costs, AWT then communicates the optimum recommendation to the master.

Often times the differential between IFO and LSFO is not great enough to prompt a deviation from the optimum weather route, but at other times it may be significant.

With the new regulations, the dependency on data based on timely and accurate pre-plans will be even more critical. In early investigations, AWT believes that fuel cost differentials between IFO and Ultra Low Sulfur Fuels (ULSFO) will be on the order of $300 - $400 USD. Given the disparity between these two fuel grades, on a cost basis, the impact on routing decisions is expected to be substantial.

Steaming for a longer period of time or even at the wrong speed will have a profound impact on the cost of a voyage. Issues to be considered are as follows:

AWT pre-plans allow operators to solve the issues presented above by comparing distance steamed inside and outside the ECA against fuel cost and hire cost for two or more routes. The high cost differentials expected between IFO and ULSFO may result in more radical diversions from direct routes while still producing overall savings for the voyage. The question of course becomes how much time and distance should you consider adding? 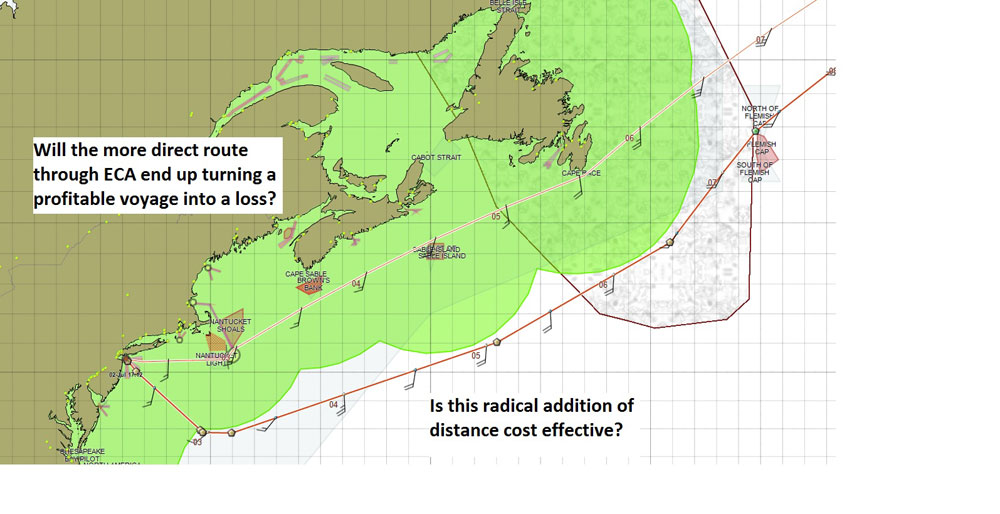 Another facet introduced with the advent of ULSFO in ECA areas is alternate speed settings. It is important to consider one speed for non-ECA steaming and another speed for ECA steaming.

This very issue was addressed in a recent AWT Insights article: "Depending on the specific trade route the ECA zones may have a significant impact on total voyage costs and our calculations show that a simple voyage from Gibraltar to Rotterdam can find on average an additional 2 to 3 percent savings in fuel simply by optimizing speed and consumption inside and outside of the ECA zones, for which the sulfur allowance in the fuel will become still more stringent in 2015."

AWT has found that adjusting speeds in the ECA can provide considerable savings, and therefore our BVS onboard weather routing software is being modified to include two speed settings to reduce consumption in ECA zones while still achieving ETA targets.

Voyages that are departing or arriving North America are likely to carry ONLY the necessary ULSFO needed to exit the ECA zone. Far too often in the winter, circumstances arise where it becomes prudent to sail a particular route that will limit vessel exposure to severe weather conditions. When AWT presents the options to the Master, it is not uncommon to hear that the ship does not have enough low sulfur fuel to sail the suggested route. As a result, extremely long routes are sailed and/or routes that expose the vessel to prolonged heavy weather. Here is an example to highlight this fact.

Example: A ship sailing from the English Channel to the Wilmington, North Carolina (USA).

At the start of the voyage the suggested route to sail to near 34N 072W then direct to Wilmington, reduced overall ECA steaming time. As the voyage progressed however, it became apparent that a developing storm would not permit this route. Several route options were considered, including:

1) Sail north of the storm in more moderate following conditions but longer exposure to ECA, however, keeping overall steaming distance to a minimum.

2) Sail sharply to the south to pass east and south of the heaviest weather adding about 320 NM to the voyage. The ECA time is reduced but overall steaming time and exposure to heavy weather increases significantly. 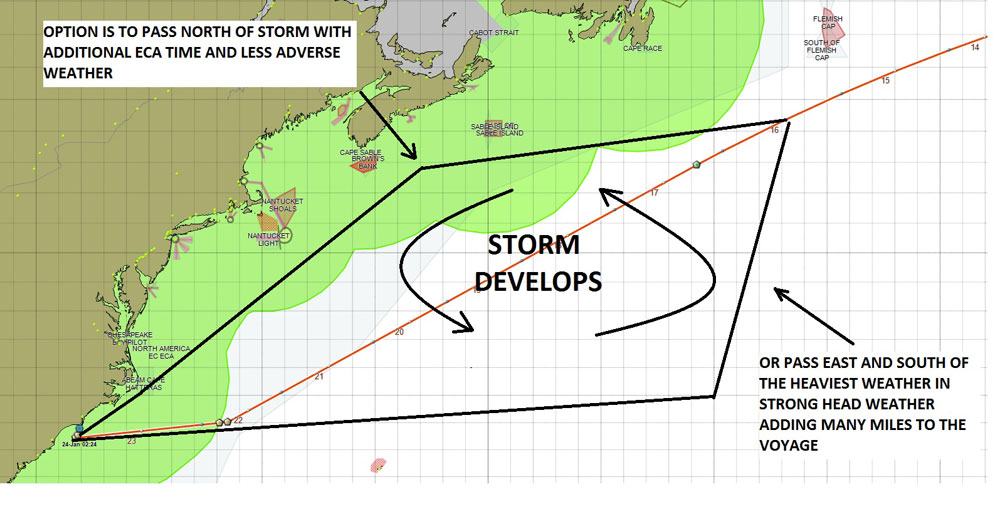 The introduction of ECA zones has presented new challenges to optimizing the voyage, yet AWT has overcome these challenges. The recently launched AWT SmartSpeed ship route advisory service provides an optimum solution by recommending both route and speeds to safely reduce fuel cost. And by putting tools into the operator's hands, we allow them to make quick, informed decisions with voyage safety and the bottom line in mind.