AllSeas recent successful removal of the Yme platform was the first job completed by the Pioneering Spirit – demonstrating that the world’s first single lift vessel was back on track after a spate of recent delays.

The next decommissioning job for the vessel will be the monumental task of removing the topsides from the Brent platforms, some of which weigh over 20,000 tons. Douglas-Westwood estimates that single lift vessels could potentially lead to almost $12 billion in savings on decommissioning costs between 2016 and 2040, though this is contingent upon a wide range of factors.

This forecast is based on the latest decommissioning data from Douglas-Westwood, which includes the Netherlands.

We expect the U.K. and Norway to dominate expenditure due to the large amounts of installed infrastructure they both have, much of which is past design life. Overall we expect costs to total $88 billion, though this could be as low as $76 billion if single lift vessel technology is fully embraced and successful. 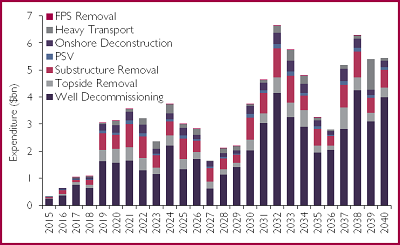 We expect spend on decommissioning in the North Sea to grow extensively in the next few years becoming a major part of oil and gas industry expenditure. This will be spurred on by the low oil prices which have led operators to embark on major cost-cutting exercises. As a result, removing legacy maintenance costs from their annual budgets will be crucial.

Operators have known for many years that decommissioning had to happen but deferral has generally been chosen, with operators preferring to pay the smaller maintenance costs than the large (one off) decommissioning cost – even for fields that have ceased production.

Decommissioning is often framed in a negative light but there are a range of companies that stand to benefit from the uptick in decommissioning activity, including onshore yards, engineering firms and vessel operators, who could find a reprieve from the difficult conditions elsewhere in the oil and gas sector.

Due to a large number of ageing fixed platforms the U.K. is expected to see much of the early decommissioning work, with large scale Norwegian activity following later in the forecast. As a result there is an opportunity for companies to establish strong reputations for decommissioning in the U.K. that will help them when Norway requires large scale work.

Ben Wilby is an analyst at Douglas-Westwood.