Malaysia’s Ministry of Transport has published an article detailing how Inmarsat helped to pinpoint the southern corridor flight path taken by MH370.

It reports that Inmarsat informed them on 13 March that routine automatic communications between the Inmarsat satellite and MH370 could be used to determine several possible flight paths. 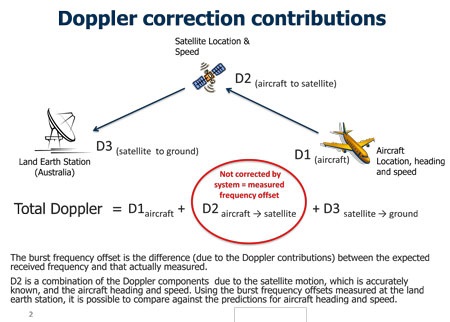 The report states that the calculations were made using the automatic pings sent to the satellite via the ground station and the aircraft after it vanished.

It explained that if the ground station does not hear from an aircraft for an hour it will transmit a ‘log on/log off’ message – a ping – and the aircraft automatically returns a short message indicating that it is still logged on, a process described as a handshake.

Inmarsat was then able to calculate the range of the aircraft from the satellite, and the time it took the signal to be sent and received, to generate two arcs of possible positions – a northern and a southern corridor.

The report goes on to explain that Inmarsat developed a second innovative technique that took into account the velocity of the aircraft relative to the satellite and the resulting change in signal frequency, known as the Doppler Effect.

The Inmarsat technique analyzed the difference between the frequency that the ground station expected to receive and the one actually measured, known as the Burst Frequency Offset.

To check its theory, Inmarsat compared its predictions with six other B777 aircraft flying on the same day in various directions, which resulted in a good match. 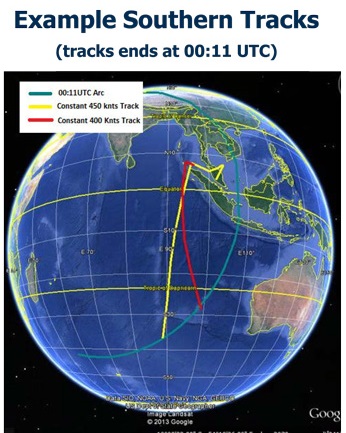 The analysis fitted well with the southern corridor, according to the report, and depending on the ground speed of the aircraft, it was then possible to estimate positions at 00:11 UTC – when the last complete handshake took place.

The Malaysian government statement emphasized that the last handshake should not be interpreted as the final position of the aircraft because of evidence of a partial handshake between the aircraft and ground station at 00:19 UTC.

No response was received from the aircraft at 01:15 UTC, when the ground earth station sent the next log on/log off message, indicating that the aircraft was no longer logged on to the network, it added.

Therefore, at some time between 00:11 UTC and 01:15 UTC the aircraft was no longer able to communicate with the ground station – consistent with the maximum time the aircraft was able to fly, the article concluded.

The Malaysian investigation has now set up an international working group, including agencies with expertise in satellite communications and aircraft performance, to take this work forward.