Physicist Professor Steven Desch from Arizona State University has come up with an idea for combatting Arctic ice loss. He is proposing the installation of 10 million wind-powered pumps over the Arctic ice cap. In winter, these would be used to pump water to the surface of the ice where it would freeze, thickening the cap.

Desch came up with the idea after feeling unhappy that the only scientific solution anyone was proposing to combat climate change was to radically reduce CO2 emissions, a near impossibility in a world filled with people and their machines, he says.

“We can’t put the world back the way it was,” Desch said, “so how can we at least work on fixing part of the problem?”

Ice in the Arctic is melting faster in the summer and not building enough in the winter. This represents a strong positive feedback on climate because while ice reflects 90 percent of sunlight, the ocean absorbs 90 percent of sunlight, so the less ice there is, the more heat the planet absorbs. In addition, when Arctic permafrost ground melts, it releases methane, amplifying the greenhouse effect in the atmosphere just like CO2.

Leading climatologists estimate that the situation needs to change within 20 years or this sequence of less Arctic ice in the winter and more melting during hotter summers will lead to the Arctic Ocean being completely ice-free in summer as soon as 2030. 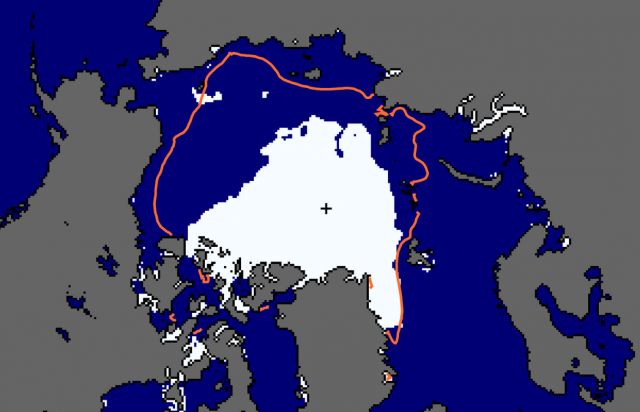 Arctic sea-ice extent (area covered at least 15 percent by sea ice) in September 2007 (white area). The red curve denotes the 1981-2010 average. Sea-ice extent in 2016 was the second lowest ever recorded. Image courtesy of the National Snow and Ice Data Center

“Ice-free summers are in our future,” Desch said. “We have to do something now, and we have to do it in the Arctic.”

Scientists and students in the University calculated that 1.4 meters of seawater pumped to the frigid surface during the long Arctic winter night would produce an additional one meter of ice in a single winter.

The system they propose would involve a windmill pump on a buoy with a hose. The windmill would give power to the pump, the buoy would keep the device afloat in summer, and the force of the water from the hose would help distribute it around the windmill.

Each windmill-powered pump could spread ice over about a 0.1 square kilometer (0.04 square mile) area in the Arctic. About 10 million windmills would be needed to cover a large enough area to be effective. At an estimated cost of $50,000 per windmill, implementation over 10 years would cost about $50 billion per year.

“The scale of climate change and associated problems is so large it paralyzes us into inaction,” Desch said. “But we can make real progress in the Arctic by putting people to work and using just a fraction of the industrial capacity that accidentally caused climate change in the first place.”

“Maybe trying to make more ice in the Arctic using windmills and pumps and hoses is a crazy idea,” Desch admitted, “but what’s really crazy is doing nothing while the Arctic melts.”

The next step the team proposes is to work with colleagues internationally to promote the idea of Artic ice management and apply these ideas to saving, and perhaps creating, more Arctic ice. They will then build prototypes of the windmill pump to see what would work in the real world.

They also propose working on other ice-saving ideas like marine cloud brightening, essentially making fog and blocking sunlight, to stop the ice from melting in the summer.

“We hope to provoke discussion and action,” Desch said. “Whether we choose to be in or not, we’re in charge of the climate now, so let’s all do the best we can.”