Sea Shepherd Conservation Society, a U.S.-based non-profit marine conservation organization, has filed claims against Japan’s Institute for Cetacean Research (ICR) in the U.S. District Court for the Western District of Washington, seeking a declaration that ICR’s whaling in the Southern Ocean near Antarctica is illegal under international law.

Sea Shepherd is also asking the court to grant an injunction preventing ICR from continuing its illegal whaling, and to ban it from continuing to use what it considers to be violent and dangerous actions to protect its illegal activities from volunteer activists defending the whales.

These requests are part of the counterclaims that Sea Shepherd – joined by its founder, Paul Watson – filed in response to a lawsuit brought by ICR seeking a permanent injunction to prevent Sea Shepherd from interfering with ICR’s illegal whale hunt. ICR’s lawsuit resulted in a temporary injunction by the Ninth Circuit Court of Appeals that required Sea Shepherd and Watson to stay at least 500 yards away from ICR’s whaling fleet while it is killing whales in the Southern Ocean surrounding Antarctica. The case is set for trial in fall 2016. 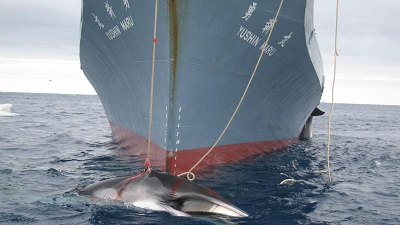 “Sea Shepherd intends to defend the whales in court just as it has done at sea,” said Sea Shepherd attorney Claire Loebs Davis, a partner at Seattle-based Lane Powell PC. “Although Sea Shepherd maintains that the U.S. federal courts do not have the jurisdiction to intervene in disputes occurring on the high seas on the other side of the globe, once the courts are involved, they must take into account that ICR is engaged in activity that is illegal under international law, and is using violent and aggressive measures to protect that illegal activity.”

The request for the injunction against Japanese whaling coincides with the meeting of the International Whaling Commission’s (IWC) scientific committee currently taking place in San Diego, which will consider whether Japan’s latest proposal to continue to kill whales in the Southern Ocean Whale Sanctuary complies with the IWC’s global moratorium on commercial whaling and its ban on whaling in the Southern Ocean Whale Sanctuary.

However, last year, the International Court of Justice (ICJ) ruled that ICR’s “research” had no legitimate scientific basis and amounted to commercial whaling, which is in violation of the global moratorium. In 2008, the Australian Federal Court enjoined the Japanese whalers from killing whales in the Australian Whale Sanctuary, which makes up part of the Southern Ocean Whale Sanctuary. Japan and ICR have ignored that injunction.

In the wake of the ICJ decision, Japan has proposed killing nearly 4,000 whales over the next 12 years in the Southern Ocean Whale Sanctuary, as part of a new scientific research plan. That plan was rejected in February by a 10-person expert panel designated by the IWC’s Scientific Committee, and will be considered by the full Scientific Committee currently meeting in San Diego.

In its counterclaims, Sea Shepherd asked the Court to prohibit future whaling by ICR in the Southern Ocean, on the grounds that its killing of whales violates international law, including by violating the U.N. Convention on the Law of the Sea (UNCLOS), the Whaling Convention, the Convention on International Trade in Endangered Species of Wild Fauna and Flora (CITES) and the World Charter for Nature.

Sea Shepherd’s claim recognizes that the whales themselves – each an individual being with a sense of self, an advanced cognitive capability and the capacity to experience profound physical and emotional suffering – have a “fundamental interest in their own lives and the lives of their families.” As the exhibits submitted with Sea Shepherd’s counterclaims illustrate, ICR targets families of whales swimming as pods – including mothers and their calves – and kills them using grenade-tipped harpoons and automatic weapons, causing an agonizing death that may take as long as 45 minutes. 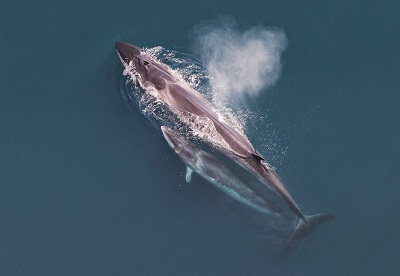 “Countries around the world recognize the importance of preserving whale populations that were decimated by commercial whaling before the global moratorium took effect," said Davis. “Yet ICR has continued to kill these whales in violation of international law. Targeted species have included the endangered fin whale —one of the largest species on earth, more than 95 percent of which were wiped out by commercial whaling. Not only that, but ICR kills these whales using brutal and inhumane methods, and does so in the internationally recognized Southern Ocean Whale Sanctuary, where they are supposed to have safe haven.”

Sea Shepherd also claims that ICR is guilty of piracy for illegally killing and taking whales from the sea for commercial profit and for engaging in violent actions against Sea Shepherd volunteers – including ramming vessels, hurling stun grenades and grappling hooks, employing bamboo poles as spears and firing water cannons at vessels and helicopters. In addition to injunctive relief, Sea Shepherd is requesting damages done to its vessels in past years, including for the deliberate ramming and destruction of the Sea Shepherd vessel Ady Gil in 2009.

Additional counterclaims by Sea Shepherd and Watson assert that ICR has violated Sea Shepherd’s right to freedom of safe navigation on the high seas by attacking and causing significant damage to Sea Shepherd vessels and endangering the safety of Sea Shepherd crew, and that ICR has violated the International Convention for the Suppression of the Financing of Terrorism by collecting millions of dollars to fund these acts of violence. In 2011, the Japanese government allegedly admitted that almost $30 million dollars donated by concerned individuals worldwide to be designated for the tsunami and earthquake victims had been diverted to the whaling industry, states Sea Shepherd in a statement.

ICR and the Japanese whaling corporation from which it charters its boats and crew, Kyodo Senpaku, first filed suit in the federal district court in Seattle against Sea Shepherd and Watson. In March 2012 the district court denied ICR’s motion for a preliminary injunction in a 44-page opinion, which was reversed by the Ninth Circuit. 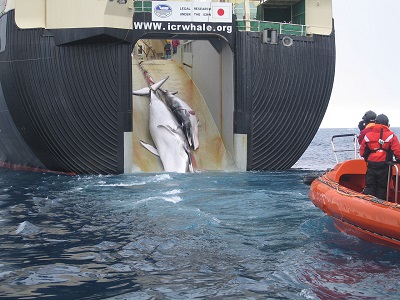 In December 2012 the Ninth Circuit Court of Appeals entered its own temporary injunction, prohibiting Sea Shepherd, Watson, and any party acting in concert with them from approaching ICR’s vessels closer than 500 yards in the Southern Ocean, endangering the safe navigation of those vessels, or attacking them.

Although Sea Shepherd subsequently withdrew from the Southern Ocean whale-protection campaigns, in December 2014 the Ninth Circuit found Sea Shepherd and Watson in contempt of the injunction based on the actions of independent foreign groups that continued the campaigns. Sea Shepherd filed a petition last month asking the U.S. Supreme Court to review this decision, claiming that the Ninth Circuit exceeded its jurisdiction by interfering in a conflict involving foreign parties on the other side of the globe, and that it erroneously found Sea Shepherd in contempt even though it had complied with the injunction.

The latest filing against ICR is available here.