GARD and DNV GL have joined forces to launch an awareness campaign on watertight doors. Watertight doors are crucial for reducing ship vulnerability in cases of flooding, as witnessed from the time of the Titanic to today, and the initiative is the result of re-occurring deficiencies during surveys and accidents leading to injuries and fatalities.

Large shipping losses have decreased by some 45 percent over the last decade, and it is evident that improved safety barriers for controlling flooding have a strong impact on reducing risk, says DNV GL. Foundered (sunk or submerged) is the main cause of losses, accounting for half of all losses over the period 2005–2016. An open watertight door in a flooding scenario is a failure that rapidly may lead to capsizing or foundering depending on the ship design, and for which there may be no recovery.

Grounding is the second major cause (20 percent) after fire (10 percent), while collision is the fourth major cause (7.3 percent). For these major accident scenarios, controlling the ship’s internal watertight integrity – and therein the watertight doors – can make a significant difference when it comes to reducing the consequences related to loss of life and asset. 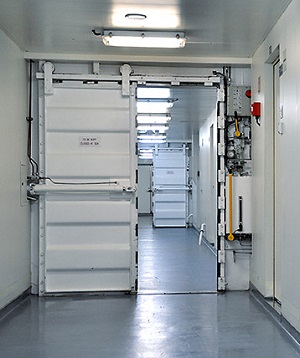 A watertight door compromises several technical systems (structural, electrical, hydraulic, control), with many possible failure modes, and the doors are constantly subject to wear and tear. Efficient barrier management depends on procedures describing correct operation during voyage and in emergency situations, as well as procedures ensuring correct and efficient maintenance. Finally, there is the human element and the knowledge and motivation of crewmembers to operate the system correctly.

By launching an awareness campaign, GARD and DNV GL intend to increase confidence in watertight doors as a barrier in case of flooding and create better understanding of how the watertight doors are designed and should be operated and maintained.

A key element of the campaign is to develop a proactive closing culture. This means being prepared for possible external events such as a collision, grounding or bad weather. The project team has also been working with the industry in assessing work orders in planned maintenance systems.

On April 10, 1912, the R.M.S. Titanic set sail across the North Atlantic Ocean, from Southampton to New York. She was thought to be unsinkable, but sank on April 15, the Titanic sank after colliding with an iceberg. Over 1,500 passengers and crew died.

However, the compartments were not watertight, as they did not possess a roof section. They were like a jar without a lid, and after hitting the iceberg, water began flooding the vessel's forward six compartments. The bulkheads were not tall enough to contain the water, and in just over two and a half hours, the Titanic filled with water and sank.

Root cause investigations undertaken by GARD after incidents involving power operated watertight doors have revealed that it has been common practice on board ships to not to fully open them before passing through the doors. Most accidents involving people occur when the doors are in bridge control “doors closed” mode. GARD has previously highlighted some cases where crew members have been injured or killed as a result of watertight door accidents:

In 2008, an engine room fitter was found trapped in a hydraulically operated watertight door in the machinery space of the Ro-Ro passenger ferry Eurovoyager. It was found that the door closed in only seven seconds, three times faster than allowed on board new vessels, and that the fitter could not have followed the recommended transit procedure. The door had been in "remote control", contrary to SOLAS requirements, and thereby closed automatically once its local operating handle was released.

In 2009, the crew on board the Australian passenger vessel Oceanic Discoverer were conducting a fire and emergency drill in the port of Napier, New Zealand, which included a test of the watertight doors. For the test the master closed the doors remotely from the bridge. Some minutes later, the chief engineer was trapped by a door to the engine room when attempting to pass through. The chief engineer was taken to hospital, but died. The investigators of the New Zealand Transport Accident Investigation Commission (TAIC) found that crew members on board the vessel were used to the doors being set in "local control" on the bridge. When releasing the lever opening a door, the door would then stop in that position until activated for closing. With the bridge control in "doors closed" mode, however, the doors would close automatically when opened locally as the lever was released.

It was also found that crew members had a habit of going through the doors before they were fully opened, and that the movement of the particular door had been set at twice the permitted speed. There was also a failure to the sound alarm for the closing of the door. Maintenance of the watertight doors was not a part of the safety management system on board.

In 2011, the Maritime Authority of the Cayman Islands issued a warning concerning a near-miss on board a large yacht. Due to a loss of power to the control of watertight doors, the doors went to their "fail safe" position closed. Hearing the local alarm for doors closing, a crew member went to investigate and tried to stop the door from closing using his foot. He had to call for assistance and another crew member assisted to release him by using the local door control. The door was fully electric; had it been more powerful, like the hydraulically- operated doors are, the crew member would probably not have escaped without injury.

An awareness video by GARD and DNV GL is available here.