A group based in Chile has received design approval for what it believes can be a revolutionary ship to improve the farming and production of fish. The Ocean Ark, a concept for a floating, offshore, self-propelled aquaculture vessel, received an Approval in Principle from the Italian ship classification society RINA.

The vessel which is a movable fish farm is a truly unique vessel concept. The initial designs are for a 558-foot-long vessel with a 197-foot beam using a trimaran design to create large tanks with metal cages to contain the fish. The vessel would be self-propelled with diesel-electric motors and capable of operating at speeds of four knots. Initial testing indicates it could operate in seas with waves over 20 feet. 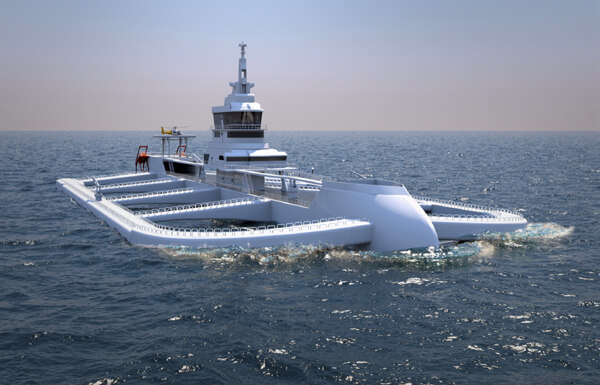 Ocean Arks Tech of Chile (OATECH) notes that the oceans may play a critical role in future fish farming for the production of nutrition to meet the needs of the world’s growing population. They believe that the Oak Ark, with its capacity of 4,000 tons of biomass, has the potential to become a disruptive technology that allows for the low-density production of healthier, higher-quality fish at lower costs than the offshore, land-based, and coastal aquaculture systems.

The fish-farming vessel was developed following RINA Rules and meets Marpol, SOLAS, and IMO regulations. Self-propelled, AI-assisted, the vessel is designed to produce low emissions and operate in a fully autonomous mode or with a crew of up to 20. The AI systems and self-cleaning fish cages would help secure fish health and welfare. The vessel would also have the ability to maneuver away from threatening situations ranging from marine heatwaves to algae blooms and storms. Oak Arks notes that the vessel could operate near Asian, U.S., or E.U. consumer markets reducing the need to transport the fish to market.

"This is an unusual vessel. Its AiP presents a milestone for both the fish farming industry and for the classification of ships with an unconventional design,” said Patrizio Di Francesco, RINA Marine Principal Engineer for North West Europe. “It is an innovative approach to the sustainable harvesting of fish to help ensure food security and sovereignty and one which may revolutionize fish farming for the future.”

OATECH reports that it has MOUs to build the Ocean Arks with a range of world-leading shipyards, including China Merchants Industry Holdings, Tersan, and CIMC Raffles.