The U.S. Navy honored late civil rights leader Cesar Chavez on Thursday as a veteran who served in the Western Pacific just after World War II with full graveside honors at his memorial in California, Chavez's foundation said.

Chavez, a labor leader and civil rights icon who is revered by agricultural workers and Hispanic Americans and co-founded the United Farm Workers union, died 22 years ago on Thursday. 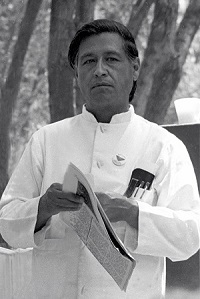 The ceremony at his gravesite in the Memorial Garden of the Cesar E. Chavez National Monument in Keene included a Navy bugler playing "Taps," a rifle salute, and the folding of the American flag and its presentation to his widow, Helen, the Cesar Chavez Foundation said in a statement.

"Chavez belonged to generations of Latinos who returned home from the service after World War II, Korea, Vietnam and conflicts as recent as Afghanistan determined to see that the country for which they sacrificed fulfilled its promise of equality and freedom," the statement said.

Active duty and reserve sailors across California attended the formal function which is being co-sponsored by the foundation, the National Chavez Center, and the U.S. National Park Service, which operates the memorial.

The program also features exhibits including photographs of Chavez in the Navy, and presentations and short films recognizing Latino veterans' patriotism and sacrifices for their country.

In 2012, the U.S. Navy launched a new cargo ship and christened it the USNS Cesar Chavez in the labor leader's memory. The foundation said it is the only U.S. naval vessel to be named for a Latino.