Industrial fishing fleets dump nearly 10 million tons of good fish back into the ocean every year, according to new research.

The study by researchers with the Sea Around Us, an initiative at the University of British Columbia’s Institute for the Oceans and Fisheries and the University of Western Australia, revealed that almost 10 percent of the world’s total catch in the last decade was discarded due to poor fishing practices and inadequate management. This is equivalent to throwing back enough fish to fill about 4,500 Olympic sized swimming pools every year.

Fishers discard a portion of their catch, because fishing practices damage the fish and make them unmarketable, the fish are too small, the species is out of season, only part of the fish needs to be harvested, as with the Alaska pollock roe, or the fishers caught species that they were not targeting.

Dirk Zeller, lead author of the study, senior research partner with the Sea Around Us and professor at the University of Western Australia, says: “Discards also happen because of a nasty practice known as high-grading where fishers continue fishing even after they’ve caught fish that they can sell,” said Zeller. “If they catch bigger fish, they throw away the smaller ones; they usually can’t keep both loads because they run out of freezer space or go over their quota.”

The study examined the amount of discarded fish over time. In the 1950s, about five million tons of fish were discarded every year, in the 1980s that figure grew to 18 million tons. It decreased to the current levels of nearly 10 million tons per year over the past decade. 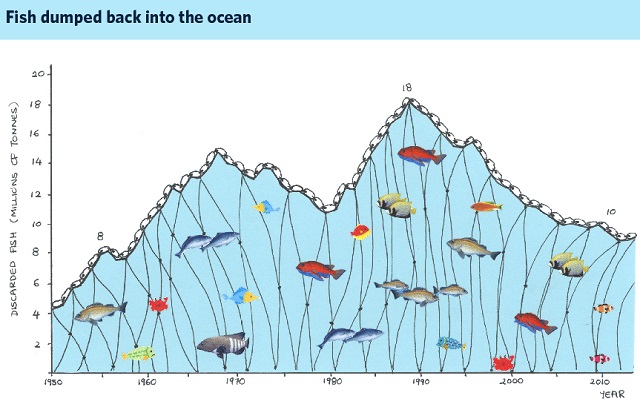 The decline in discards in recent years could be attributed to improved fisheries management and new technology, but Zeller and his colleagues say it’s likely an indicator of depleted fish stocks. Catches have been declining at a rate of 1.2 million tons of fish every year since the mid-1990s.

“Discards are now declining because we have already fished these species down so much that fishing operations are catching less and less each year, and therefore there’s less for them to throw away,” he said.

“The shift of discards from Atlantic to Pacific waters shows a dangerous trend in fisheries of exporting our fishing needs and fishing problems to new areas,” Cashion said.