The project, called BaSEC, Barents Sea Exploration Collaboration, will initially last for three years. The project will cover the Barents Sea, but with a special focus on the areas included in the 2015 23rd licensing round.

"We are taking operational responsibility seriously and have connected leading companies with operations in the Barents Sea to work together to find good and robust solutions for the tasks we see ahead, especially considering the new areas that have been opened in the Barents Sea south-east," says Statoil's Irene Rummelhoff, senior vice president for exploration in Norway.

The project, which was initiated by Statoil and Eni Norge, will be led by Statoil in the first phase, but all the companies participate in the steering group and contribute to the working groups, and the work will start immediately.

The Barents Sea is considered one of the more accessible Arctic regions and is estimated to have eight million barrels of oil equivalent in undiscovered resources.

"Our goal is to increase coordination and develop cost-effective solutions for exploration in the Barents Sea in both the short and medium term. We will collaborate with authorities, industry organizations and other relevant institutions to deliver on this. We aim to be effective and address the concrete actions that need to be taken and share relevant solutions and data with both the authorities and the rest of the industry. It is in our common interest to have robust exploration activity in the Barents Sea," says Rummelhoff.

The companies aim to find common solutions for operations in the Barents Sea, and through that contribute to high level of safety and emergency response. This will happen through sharing of data, cost-effective solutions, more collaboration and increased coordination.

The following working groups will be established: 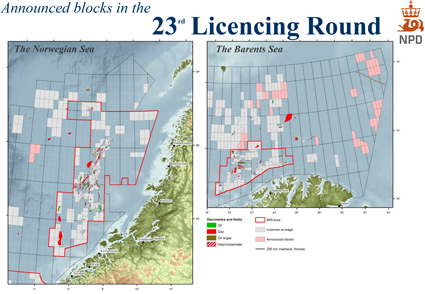 The criteria for participation is to either have made discoveries in the Barents Sea and/or have two or more operated licenses north of 73° N. The project will evaluate adding more participants after the awards in the 23rd licensing round.

“The interest in exploration in the Barents Sea has increased significantly following the exciting discoveries in recent years; 7324/8-1 (Wisting), 7120/1-3 (Gotha) and 7220/11-1 (Alta),” said Sissel Eriksen, exploration director in the Norwegian Petroleum Directorate.

“It is fifty years since the government announced the first licensing round on the Norwegian continental shelf. With that hindsight the new areas in the southeast Barents Sea are particularly interesting. These are areas which are hitherto unexplored. This could open up a new petroleum province in the Barents Sea. This licensing round helps keep the activity level high, but we must also prioritize step-by-step exploration in the new areas.”

The application deadline is December 2, 2015. The Norwegian government aims to award new production licenses in the first half of 2016.