The International Transport Workers’ Federation (ITF) is once again calling attention to a case of crew abandonment as the union’s representatives work to make sure the stranded crew has ample provisions and water. The case is made worse according to the ITF as the vessel is currently anchored near a busy seaway and by the fact that the ship has had repeated claims of not paying and providing for its crew.

Steve Trowsdale, Inspectorate Coordinator at the ITF, is warning that with the vessel powerless and unable to display its sidelights the risk of a collision is high due to the anchorage’s proximity to a crowded seaway off Dakar, Senegal in West Africa. The ITF is calling on the local authorities to assist by moving the vessel while demanding that the shipping company based in Honduras provide for the crew, their safety, and the safety of the vessel.

The Onda, a 32-year-old general cargo ship has reportedly been anchored at Dakar for more than five months with the ITF saying the vessel was declared abandoned. Measuring 252 feet in length, the 2,650 dwt vessel is reported to have been operating at different periods around Africa in between bouts of engine troubles and periods of lay-up. She reportedly spent much of 2021 idle in Cameroon with another crew that believed it too was being abandoned by the owner who is thought to be in Lebanon.

The engine aboard the vessel has reportedly stopped working leaving the crew without electricity, navigation lights, or power for cooking and daily necessities. The ITF reports there are four crewmembers stranded aboard the ship from Cameroon, Lebanon, Nigeria, and Syria owed between five and nine months back pay. The ITF estimates the monies due at over $59,000.

The management company reportedly is proving some provisions to the crew, but they are forced to cook over an open fire on deck since there is no power. The ITF’s local representative says the union is ensuring they have enough food and water. 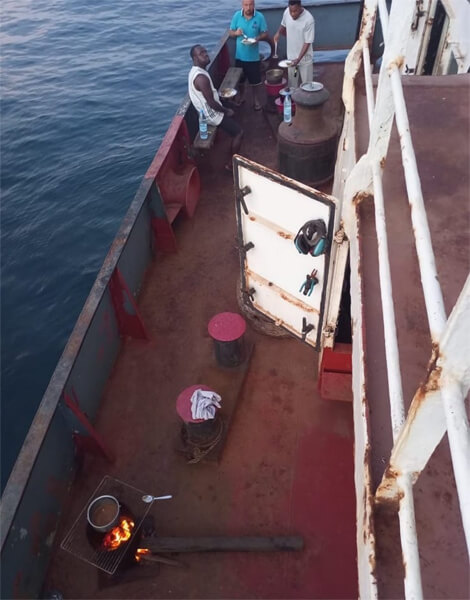 The ITF has asked the Senegalese authorities to move the vessel to dock to reduce the danger. Under the provisions of the Maritime Labor Convention, the crew has also made a formal request for reparation at the company’s expense.

“Dakar’s anchorage has ships coming and going all the time. It sits a few kilometers from West Africa’s main shipping lanes,” said Trowsdale. “An unlit vessel positioned there at night puts the lives of the Onda’s seafarers in immediate danger as well as those on any ship passing by. There has already been one near miss. If an oil tanker crashes through the Onda, there will be an environmental as well as human disaster.”

The ITF also contends that the situation has been made worse because the vessel’s flag status is uncertain. She was registered in Togo, but that country says that the vessel transferred its flag to Guyana in July 2021. According to the ITF, Guyana has no record of the ship leading the ITF to accuse the vessel of operating illegally under a false flag.

The inspectors also report that the vessel has a history of similar crew situations. When it was in Cameroon in 2021, the company said the ship was laid up with a watchkeeper while the ITF says there were four crewmembers stranded aboard who had not been paid for months.  In 2018, the ITF says that other crewmembers also reported the vessel for denying pay and rations.

Lacking confidence that the shipowner will respond, the ITF is calling on the authorities in Dakar to intervene. Lacking that, they are calling on the Senegalese government to take action on humanitarian grounds.