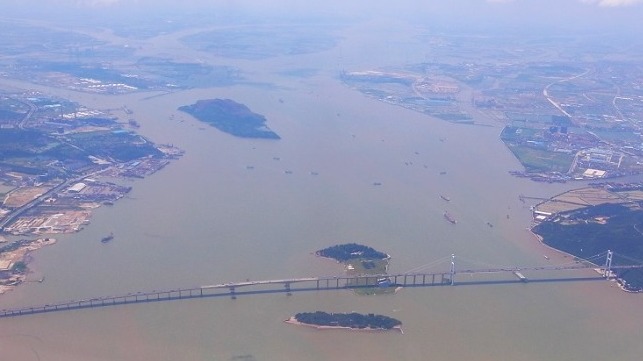 A former senior U.S. Navy employee working the Military Sealift Command was charged with bribery and lying to investigators by the U.S. Department of Justice.

Xavier Fernando Monroy, the former Director of Operations of the U.S. Navy’s Military Sealift Command Office in Busan, Republic of Korea, was charged in connection with his alleged participation in a bribery conspiracy and alleged lying to federal investigators. The complaint, filed in the District of Columbia, charges Monroy with one count of conspiracy to commit bribery, one count of bribery, one count of false statements, and one count of obstruction of justice. His co-conspirators have already plead guilty to charges stemming from the incident.

The complaint alleges that Monroy engaged in a conspiracy to commit bribery with Sung Yol “David” Kim, the owner of DK Marine, a ROK-based company that provided ship husbanding services to the U.S. Navy, and James Russell Driver III, a former civilian U.S. Navy cargo ship captain. The incident stemmed from the provision of husbanding services for Driver’s ship during a December 2013 port visit in Chinhae, Korea.

It is alleged, that in order to steer the ship’s husbanding services business to DK Marine, Driver sought, and Kim conveyed, Monroy’s directions on how to circumvent appropriate Navy procedures.

According to the affidavit filed with the complaint, Monroy also provided Kim with confidential and other proprietary, internal U.S. Navy information. In exchange for the steering of business and the provision of such information, Kim paid bribes to Monroy, including cash, personal travel expenses, meals and alcoholic beverages, and the services of prostitutes. The affidavit further alleges that in July 2019, Monroy repeatedly lied to DCIS and NCIS during a voluntary interview.

The British Ports Association (BPA) has published new research examining the barriers to shore power in UK ports, setting out three proposals to support the industry to meet ambitious emissions reductions targets. Shore power, also known as cold ironing, is the provision of shore-based electricity to ships at berth, allowing them to turn off their auxiliary engines. He concept is popular with environmentalists as it permits ships in port to turn off the typically diesel auxiliary engines that are used...

Panama’s maritime authorities issued a stern warning to all Panamanian flagged vessels seen as another crackdown on common tactics used by ships trying to avoid international restrictions or hide their activities. Panama’s directive follows the United States that recently highlighted the tactics used by illegal shippers and rogue nations. The Panama Maritime Authority warns that it will impose sanctions up to $10,000 and/or de-registration or de-flagging of the vessel from the Panama registry for any vessel that deliberately deactivates, tampers...

Thanks to advocacy by the American Association of Port Authorities and the Maritime Administration, the Federal Emergency Management Agency will be delivering 2.4 million reusable cloth facial coverings to ports and related maritime transportation operations around the United States.  The face masks are being distributed to about 400 maritime transportation entities nationwide for use by their essential personnel, including those working at seaports, inland ports, marine terminals, tug and barge lines, vessel pilot groups, dredging operations, supply chain logistics companies...

[Brief] CSSC is partnering with Guangdong Province and China National Offshore Oil Corporation (CNOOC) on a massive LNG conversion project for 1,500 inland waterway vessels.  The project will start with a demonstration project on the Pearl River, with a plan to expand it to 1,500 vessels - about a quarter of the river's fleet - by 2025. The conversion would have positive effects for local air quality, reducing overall particulate matter from shipping by 20 percent, and it would create...