Lai Sai-ming, master of the ferry Sea Smooth, has been sentenced to eight years’ prison after an October 2012 collision that resulted in the death of 39 people including eight children.

The Hong Kong court found Lai, 56, guilty of 39 counts of manslaughter and one count of endangering the lives of others at sea.

Chow Chi-wai, 58 and master of the pleasure boat Lamma IV, which collided with Sea Smooth, was acquitted of manslaughter charges but sentenced to nine months prison for endangering the lives of others at sea.

Hong Kong was in the midst of celebrating China’s National Day at the time of the accident, resulting in the area’s already bustling waters being unusually overcrowded.

Lamma IV, owned by The Hong Kong Electric Company, was carrying company employees and their families to watch a fireworks display when it was struck by the passenger ferry traveling from Hong Kong Island to Lamma Island.

The collision occurred off Lamma's coast around 8:20 p.m. and resulted in more than 100 people being flung into the water. Lamma IV began to sink almost immediately after the impact, and low visibility and obstacles on board made work difficult for rescuers.

The Hong Kong Standard reports that prosecutor Andrew Bruce previously told the court how Chow turned his vessel "too little, too late" as Sea Smooth was not only traveling at twice its speed, but also made "a monumental mistake" of turning to port in a crossing situation.

Lai's barrister Audrey Campbell-Moffat told the court: "You have here a man who's never been to school, who's been at sea all his life and has never had any accidents. I don't seek to undermine that the lack of proper lookout was the cause of the collision but, looking at the culpability of the act, it's at the bottom of the range."

In letters to the court, a passenger onboard Lamma IV, surnamed Lee, described seeing Chow doing his best to maintaining order and comforting passengers after the collision.

Both Chow and Lai have reportedly been diagnosed with post-traumatic stress disorder.

The accident was the deadliest maritime accident in Hong Kong since 1971, when a Hong Kong-Macau ferry sank during a typhoon, leaving 88 people dead. 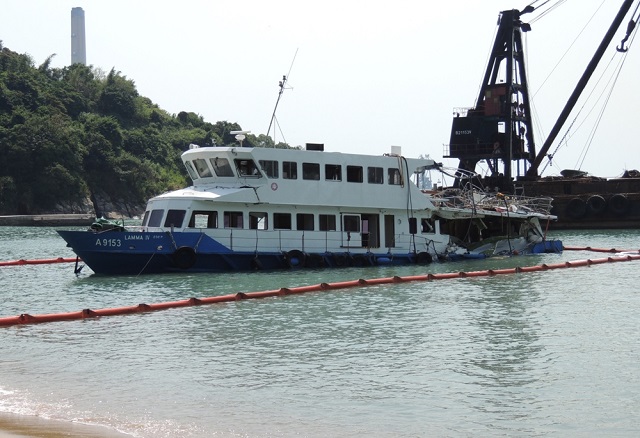