Cunard: The Man and His Company

The oddest thing about the founding of Cunard in 1839 is that the company was ever formed by a man like Samuel Cunard at all. The gamble, the challenge, the uncertainty, the sheer modernity of it all would have sat well with a man like Brunel, but not with Samuel Cunard.

To begin with, a Canadian of American parentage does not seem the classic candidate to establish a British icon. And a man so unremittingly prudent, conservative, cautious, austere – and, let’s face it, old – equally doesn’t seem the man to take such huge economic risks or to push the edges of known technology that the founding of the company entailed.

By the time he came to set up the British and North American Royal Mail Steam Packet Company, as Cunard’s company was originally known, Samuel Cunard was already a prosperous businessman and significant figure in Nova Scotia. He was comfortably settled, with his children around him, a comfortable retirement in the cosy glow of local esteem seemed to lie ahead rather than the creation of a commercial revolution. 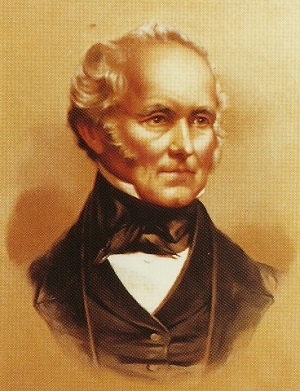 Cunard gambled everything he had to set up, 3,000 miles from home, a highly speculative and enormously risky venture uncomfortably close to the forefront of known technology. To do it, he even uprooted himself from his native Nova Scotia and took up residence in London. It all seems markedly out of character with everything he’d done before, and with everything he did afterwards when the company settled down to be a singularly cautious and conservative company in the mold of the founder.

What stimulated Cunard’s interest in establishing an entirely revolutionary transatlantic steamship service a mere two years after the first successful crossing by steam was an advertisement which appeared in The Times. The advert, placed by the British Admiralty – at that time responsible for carrying the Royal Mail overseas – invited tenders for the provision of a timetabled steamship service between Britain and North America to carry the Royal Mail. A contract of £55,000 a year was offered.

The spur for the Admiralty’s apparent generosity was the grotesquely vulnerable service provided for the mail by sailing ships; the journey times were “flexible,” with a transatlantic crossing lasting for six weeks, and with no fixed times of departure or arrival. So it was never known when the mail would arrive – or, since so many sailing ships foundered, whether it would arrive at all. What the Admiralty wanted, in line with the thrusting new technology of the Victorian age, was a maritime extension of the brand new timetabled railways on land.

Unable to find Canadian partners for what must have seemed a foolhardy venture, Cunard submitted his successful bid beyond the Admiralty’s deadline, without sufficient finance, with no steamships and with very little knowledge of what, technically, was required. His bid was successful despite all this because, unlike his competitors whose tenders told the Admiralty what they should have rather than bid on the basis of what was asked for.

Cunard’s bid – like the man – was austere and straightforward. He offered simply to provide the required service for the sum offered. He then went on to sign a contract with potentially ruinous clauses - £15,000 payable for any cancelled sailing, and £500 for each day a ship was late. What madness was this?

Nonetheless, Cunard found his financial backing in Scotland and Liverpool, and after having ordered four ships – each twice as big as he’d originally intended – renegotiated the contract, from a position of strength, to be marginally more favorable. 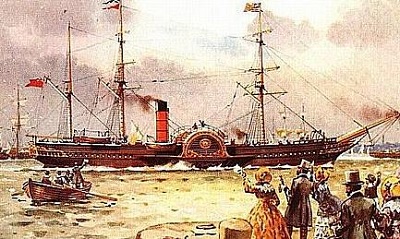 Cunard’s first ship, the 1,156-ton Britannia left Liverpool on July 4, 1840 with Cunard himself on board, and arrived on schedule in Halifax just ten days later. Within a year Britannia and her three sister ships were providing a timetabled weekly steamship service across the Atlantic – the first ever.

Cunard himself made safety his priority – and to this day Cunard has never been responsible for the loss of a single passenger or a single mailbag on the Atlantic run.

Cunard’s conservative nature enabled his company to see off rivals and to take a measured and steady approach when it came to the introduction of new technology.

Within a few decades the importance of the mail contract was dwindling as emigration became Cunard’s next guarantee of prosperity. Between 1860 and 1900 14 million people emigrated from Europe to the United States; of those, 4.5 million passed through Liverpool; and of those, half made the voyage to America with Cunard.

1902 saw the virtually unnoticed launch on the Tyne of a minor Cunard vessel destined for the Mediterranean trade – and also destined to become one of the most famous ships of all time. She was the 13,600-ton Carpathia which, in 1912, achieved immortality under the command of Captain Arthur Rostron when she sped through icefields in the night, without the benefit of modern radar and at a speed greater than she was supposedly capably of, to rescue all the survivors of the Titanic. Captain Rostron, later Commodore of the Cunard fleet, master of the Queen Mary, and knighted by the King, remarked later that a hand greater than his own guided the little ship that night. In all seven Cunard Commodores have been knighted – an honor no other company can match. 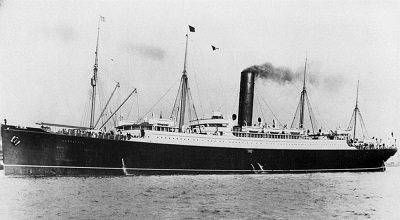 But that was glory yet to come; at the same time as Carpathia was entering service Cunard was looking none too glorious, battered as the company’s ageing transatlantic fleet was by ferocious competition from the Germans and Americans. However, Cunard’s fight back led to the introduction of three of the company’s most famous ships – Lusitania, Mauretania and Aquitania. These were the first “floating palaces” in the Cunard fleet – palaces which moved at unprecedented speed. The Mauretania held the Blue Riband for 22 years.

The interwar years, bolstered by the addition to the fleet as part of war reparations the former German vessel Imperator, renamed Berengaria, were successful and lucrative for Cunard – so much so that the company failed to notice the significance of Charles Lindbergh’s transatlantic flight in 1927. Nonetheless, the first real move from reliance on transatlantic revenues was made when, in 1922, Laconia undertook the first-ever world cruise.

Cunard did not set out to create in 1928 what King George V called “the stateliest ship now in being”, and nor did it intend to give birth to a ship which her last master, Captain John Treasure Jones, said was “the nearest ship ever to be a living being”.

What would become Queen Mary would symbolize the emergence of Great Britain out of the Great Depression and when Queen Mary, wife of King George V, became the first monarch to launch a merchant ship, a job which she accomplished with a bottle of Australian wine rather than the traditional French champagne, millions of the King’s subjects heard his wife’s voice for the very first time.

Queen Mary would be joined eventually by Queen Elizabeth and the real Golden Age of transatlantic travel would begin in the late 1940s as the biggest and fastest ships on the Atlantic did what they were built to do. This was the era of film stars and royalty being photographed by hundreds of press photographers as they stepped ashore in Southampton or New York. But in 1958 the ghost of that Lindbergh flight caught up with Cunard, as for the first time, more people crossed the Atlantic by air than by sea. The end was in sight.

A decade after 1957 the company’s fleet was reduced from 12 to two and yet, in the face of all evidence to the contrary and in what seemed to many an act of lunacy equal only to Samuel Cunard’s original madness in establishing the company, the Cunard board – as it pensioned off two transatlantic liners which had been defeated by the jet aircraft – was planning to construct another transatlantic liner. 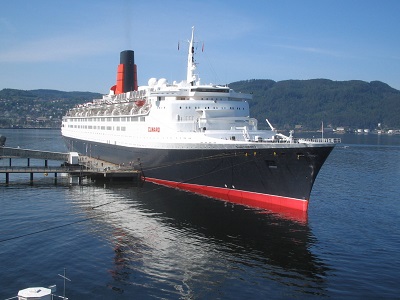 And so Queen Elizabeth 2, a true transatlantic liner with a service speed of 28.5 knots and a 1.5 inch thick hull, but which, with its ability to navigate both Panama and Suez, could be a cruise ship too, was launched by the Queen in 1967. QE2 would defy the skeptics and become the most famous ship in the world having a career spanning over 29 years and a record unmatched by any other – including sailing over five miles which is further than any other.

After an independent existence lasting 131 years Cunard was acquired by Trafalgar House in 1971 and would spend the next 30 years making the occasional acquisition here and there and investing in a new engine plant for QE2 which today remains the biggest job of its kind ever undertaken.

It was generally thought at that point that QE2 would be the last ever transatlantic liner. When she’s gone, everybody said, there will never be another. How wrong everybody was.

In April 1998 the mighty Carnival Corporation purchased a broken Cunard and to the surprise of many one of the first things they announced was the construction of a new transatlantic liner. When Queen Mary 2 entered service in 2004 she was the largest, longest, tallest, widest and most expensive liner ever built and was joined by Queen Victoria in 2007 and Queen Elizabeth in 2010.

As Cunard’s 175th anniversary approaches, the three largest ships ever built for the company proudly carry the Cunard name and will take that name far into the future.