Exporting crude oil and natural gas from the United States are among the dumbest energy ideas of all time.

The U.S. imports almost half of the crude oil that we use. We import 7.5 million barrels per day. The chart below shows the EIA prediction that production will slowly fall and imports will rise (AEO 2014) after 2016. 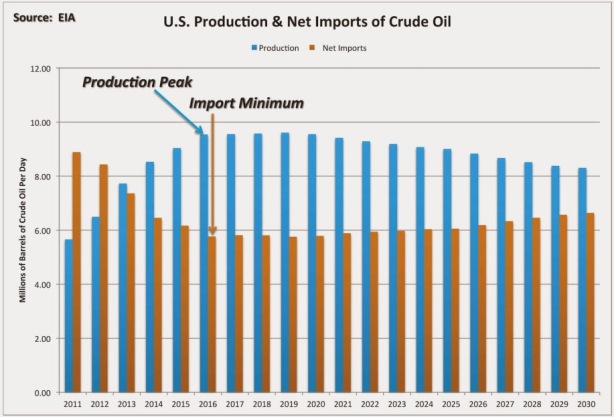 This means that the U.S. will never be self-sufficient in oil. Not even close.

What about the tight oil that is produced from shale? That's included in the chart and is the whole reason that U.S. production has been growing. But there's not enough of it to keep production growing for long. 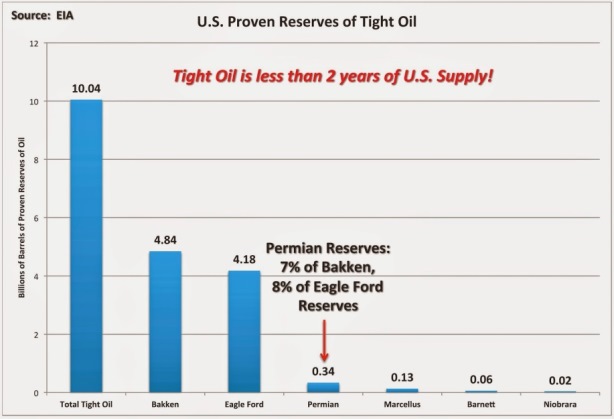 Total tight oil reserves are 10 billion barrels (including condensate). The U.S. consumes about 5.5 billion barrels per year, so that's less than two years of supply. Almost all of it is from two plays: the Bakken and Eagle Ford shales. We hear a lot of hype from companies and analysts about the Permian basin but its reserves are only seven percent of the Bakken and eight percent of the Eagle Ford.

Tight oil comprises about one-third of total U.S. crude oil and condensate reserves. The U.S. is only the 11th largest holder of crude oil reserves (33.4 billion barrels) in the world with only 19 percent of Canada's reserves and 12 percent of Saudi Arabia's reserves. 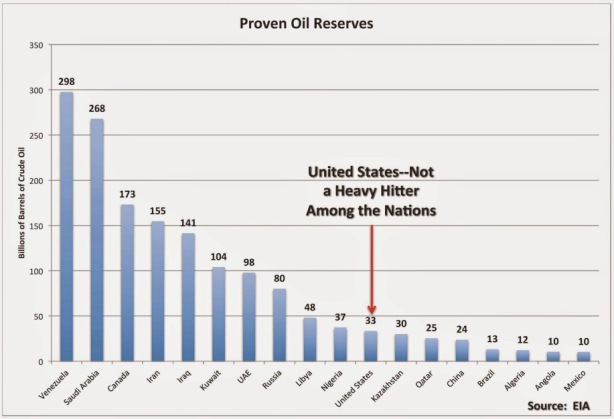 Let's put all of this together.

• The U.S. will never be oil self-sufficient and will never import less than about 6 million barrels of oil per day.

• U.S. total production will peak in a few years and imports will increase.

• The U.S. is a relatively minor reserve holder in the world.

How does this picture fit with calls for the U.S. to become an exporter of oil? Very badly. For tight oil producers to become the swing producers of the world? Give me a break.

Perhaps we should send congressional proponents of oil export like Joe Barton (R-TX), Ted Cruz (R-TX) and Lisa Murkowski (R-AK) to "The Shark Tank" TV show to try to sell their great idea to the investors and judges.

Editor’s Note: The opinions expressed herein are the author’s and not necessarily those of The Maritime Executive.