The first plans for the development of the Juneau, Alaska waterfront was unveiled this week in public meetings conducted by a local architect firm on behalf of Norwegian Cruise Line. The proposal is part of an overall investment plan the cruise line is pursuing to develop several docks in key destinations within the state.

Planning for the sites and especially the site in Juneau has been proceeding despite the global shutdown for the cruise industry that is now expected to stretch well into 2021. Alaska had been one of the most popular destinations for cruise ships with the lines each positioning newer and larger ships into the market before the pause due to the pandemic. Industry observers expect that the competition will resume in Alaska when cruising returns and may even be more popular due to the relative ease in reaching it as a destination.

Norwegian has so far declined to discuss the full extent of its investments in Juneau as well as Icy Strait and Ketchikan or the budget for the development. The cruise line won the land in Juneau placing a bid four times that of the city for the privately owned three acres along the city’s waterfront. Norwegian paid $20 million for the property, beating out Royal Caribbean International, which bid $13 million, and a private developer which bid $12.8 million. The City of Juneau bid $4.25 million on the property in the auction, which required a minimum bid of $3.6 million.

MRV Architects of Juneau previewed the plans for the half-mile of the waterfront after spending the past few months meeting with town officials and local businesses. Updated navigation studies were conducted looking at the challenges in Juneau harbor. 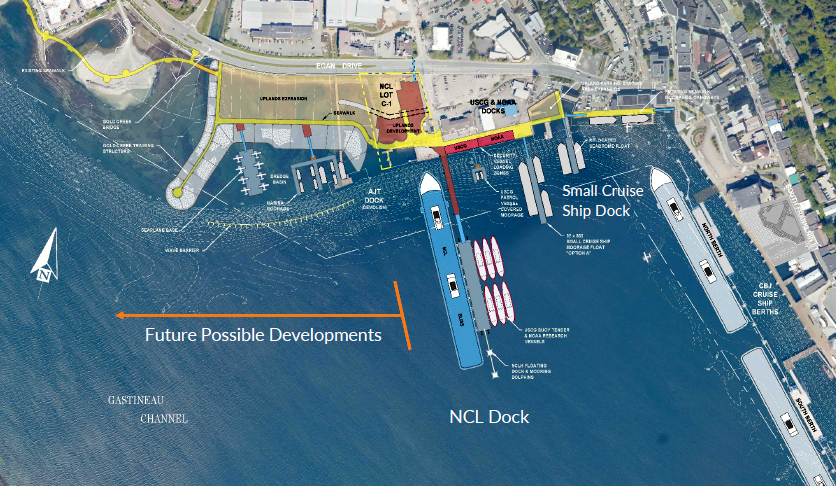 The plan calls for opening up the waterfront with green space as well as creating a building able to handle busses for the passenger shore excursions and provisions for future development. The architects said the goal is to create a property that contributes to the community while also adding a new dock able to accommodate one of Norwegian’s nearly 1,100-foot long cruise ships. There would also be walkways built to help manage the nearly 4,000 passengers aboard the cruise ship.

In presenting the plan, the architects highlighted several significant benefits both to the port and the environment. On a busy day in Juneau, the current piers which accommodate maybe four large ships are full causing another large cruise ship to anchor and tender passengers ashore. The ship at anchor emits more exhaust into the environment with its motors running and makes navigation in the port more difficult both with its tenders crossing back and forth as well as blocking access for private crafts and the seaplanes that fly into and out of Juneau harbor.

Responding to questions if the new development would attract more cruise ships they highlighted that the dock is designed for a single cruise ship and the objective was to get the anchored ship to dock. In addition, the master plan calls for small docks to be potentially used by the US Coast Guard and NOOA, which have offices on the waterfront, as well as new spaces for private crafts.

The companies are continuing to solicit comments and hosting public meetings with the community. The goal is to complete plans reflecting the comments this winter. They expect to submit finalized designs for approval in the spring of 2021.