Some passengers are still alive inside the hull of a passenger ship carrying 458 people, many of them elderly Chinese tourists, that capsized on the Yangtze River, state media said on Tuesday, in what could be one of China's worst disasters for years.

The ship capsized in a freak tornado late on Monday. Only about a dozen people had been rescued so far, state media said amid confusing reports about how many had been saved. 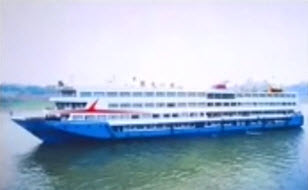 The microblog of the official People's Daily newspaper said some passengers were still inside the Eastern Star, while the official Xinhua news agency said rescuers could hear people calling for help from inside the four-deck ship.

State television showed a rescuer on the capsized hull with a blow torch, apparently preparing to cut into the ship, while dozens of rescue boats battled strong wind and heavy rain to reach the stricken vessel. A man and a 65-year-old woman have now been rescued from the hull of the vessel. Rescuers are working to save more passengers trapped inside and have recovered six bodies.

Tour guide Zhang Hui, 43, told Xinhua the capsize happened very fast and he scrambled out a window in torrential rain clutching a life vest as he could not swim.

"Wave after wave crashed over me; I swallowed a lot of water," Zhang said, adding that he was unable to flag down passing ships and finally struggled ashore as dawn broke holding onto a branch.

Chinese President Xi Jinping has ordered that no efforts be spared in rescue work and Premier Li Keqiang was heading to the scene of the accident in central Hubei province, Xinhua said.

It also later reported that initial investigations had found the ship was not overloaded and that it had enough life vests on board for the number of passengers it was carrying. Those rescued were wearing life vests, Xinhua said.

Among those on board the ship were 406 tourists, aged from around 50 to 80, on a tour organised by a Shanghai tour group, and 47 crew members, the People's Daily said. 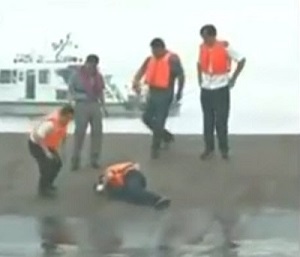 Citing the Yangtze River navigation administration, Xinhua said those rescued from the Eastern Star included the ship's captain and engineer, who have been detained by police for questioning.

According to the Yangtze River navigation administration, the pair said the ship sank quickly after it was caught in the tornado.

State radio reported that the ship sank within about two minutes and that no distress call had been issued.

The official People's Daily said seven people had swum to shore to raise the alarm.

The Hubei Daily, another official publication, said the ship had capsized in water that was about 15 metres (50 feet) deep.

Fishing boats were among the dozens of vessels helping in the search and rescue, Xinhua said. More than 1,000 armed police with 40 inflatable boats had also been sent, it said.

The captain and chief engineer of the vessel have been detained by police for questioning.

About 60 family members gathered outside a travel agency in Shanghai and demanded information.

"I only found out about this on the news while I was at work and I came here," said 35-year-old Wang Sheng, whose said his mother and father were on board. "I cried all the way here and here I can't find anyone, the door is locked." 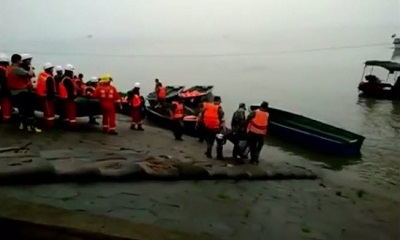 The Eastern Star, which has the capacity to carry more than 500 people, was heading to southwest China's Chongqing city from Nanjing, capital of east China's Jiangsu Province. It sank at around 9:28 p.m. local time in the Jianli section of the river.

Accidents of this magnitude are uncommon in China, where major rivers are used for tours and cruises. The incident is the worst on the Yangtze since a tug undergoing sea trials sank in January, killing 22 of the 25 people on board.

In the worst previous incident of its kind in China, the steamship Kiangya blew up on the Huangpu river in 1948, killing more than 1,000 people.

The Eastern Star is owned by the Chongqing Eastern Shipping Corporation, which runs tours along the Three Gorges area along the Yangtze river.

Wang Jianhua, its vice general manager, said it was the first time an accident of this magnitude had happened to the company. The Hubei Daily said the company has been operating since 1967.