They could easily swim away; they could easily dive below; but instead it seems that blue whales play dead when a ship approaches, and in doing so, they leave themselves vulnerable to ship strike.

"It's not part of their evolutionary history to have cargo ships killing them, so they haven't developed behavioral responses to this threat," said Goldbogen.

Ship strike is a major threat to whales, says Goldbogen, and poses a significant threat to the recovery of some endangered populations.

Goldbogen and colleagues from several academic institutions studied whales at Long Beach, California, home of one of the busiest shipping ports in the world and also a hotspot for blue whales. Just a few miles offshore, the continental shelf drops off and there is a huge upwelling of nutrients that attract krill, a favorite food of blue whales.

The scientists used suction cups to adhere GPS and dive-logging units to blue whales, and then tracked their movements for 24-hour periods. The scientists then cross-referenced this data with ship traffic, including the tonnage and speeds of ships passing through the area.

The researchers observed 20 ship passages with nine individual whales, at distances ranging from 60 meters (180 feet) to more than three kilometers. In each of these instances, the whales exhibited behavior similar to the "startle response" that scientists observe during the tagging process, in which the whales essentially "play dead."

"Blue whales have a subtle and not very convincing ability to get out of the way of oncoming ships," said Goldbogen. "Instead of diving, where the animal kicks tail up and goes down vertically, they just sink horizontally. This results in a slow dive and leaves them susceptible to ship strikes."

A whale must dive 30 meters (90 feet) below the surface to escape the suction created by a ship's propeller. In the study, the whales sank at about a half a meter per second and showed no evidence for swimming laterally to avoid the ship. In most cases, this was barely fast enough to get out of the ship's way.

Efforts to reduce collisions have mostly involved placing speed limits on ships passing through busy whale habitats or rerouting shipping channels around these areas altogether, but
New Zealand research indicates that thermal imaging could be used instead.

A study led by Martin Stanley from Ocean Life Survey and Ports of Auckland, has been trialing the use of thermal imaging to detect surfacing whales in the Hauraki Gulf.

The research evaluated whether the technology could detect a Bryde's whale in enough time to allow a commercial vessel to avoid a strike. Ship strike is a significant cause of death for these whales, and 15 are known to have been killed by commercial shipping in the Hauraki Gulf between 2006 and 2012. 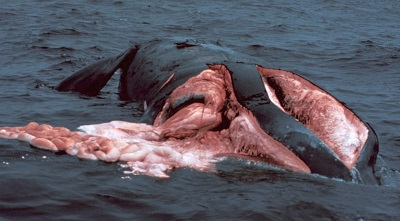 Stanley was able to demonstrate that whales can be detected by the heat of their bodies and breath and hopes that a practical tool can be developed for shipping.

While many researchers believe ship strike to be a significant threat to the whales, a recent research study from Washington indicates a contrary view, reports National Geographic. The U.S. eastern North Pacific blue whale population has rebounded since being hammered by commercial whaling, and ship strikes, long feared a major obstacle to the recovery in blue whale numbers, aren’t likely to be a major threat, says Cole Monnahan, a doctoral student at the University of Washington.

Monnahan and his colleagues used a computer model to compare eastern north Pacific blue whale population before and after commercial whaling to examine whether the population was more affected by ship strikes or environmental conditions.

The team found that “there’s no immediate population threat to these whales from ship strikes.” Rather, the reason the blue whale population in the eastern north Pacific hasn't increased, Monnahan says, is that the ocean off the west coast of North America can't support any more.

The researchers drew criticism about their methods and conclusions from other researchers and point out that they looked at only the eastern north Pacific blue whale populations. Their results in no way reflect a global recovery of blue whales, and National Geographic highlights a 2013 study which estimated blue whale population numbers in the waters around Antarctica to be nearly 300,000, although there may only be about 2,000 left now.