The report is based on a year-long Greenpeace East Asia investigation into Taiwan’s distant water tuna fisheries, and it also provided a comprehensive outline of the now infamous murder at sea of fishermen in the Indian Ocean as highlighted by international organizations in 2014, including profiling by U.K.-based charity Human Rights at Sea. 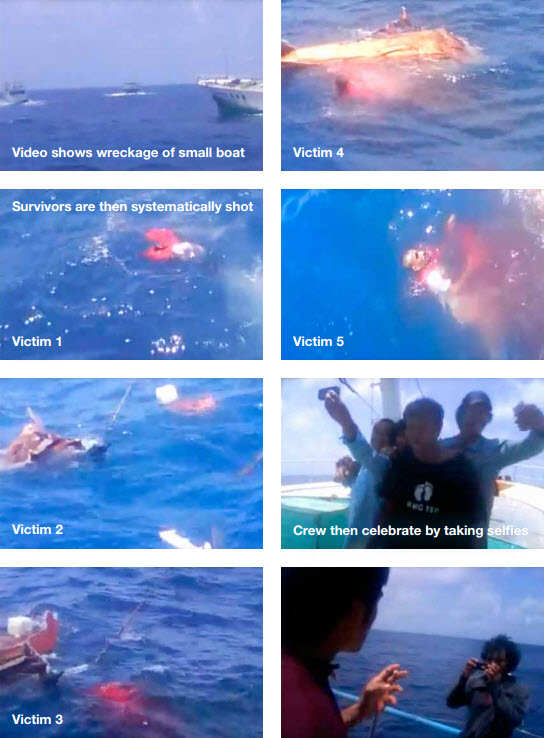 “Watching helpless men shot to death is shocking and confrontational, and the easily identified fishing vessel and smiling selfies at the end make it difficult to understand why, more than a year and a half on, there have been no arrests,” states the Greenpeace report.

“This is an extreme example of lawlessness at sea, considering the rich sources of evidence available. The absolute lack of transparency in investigations around these shootings, and Taiwan’s apparent unwillingness to vigorously pursue justice in a timely way, is suggestive of a deeper problem. With four deaths captured on video, the identifying features of the victims, the surrounding fishing vessels, the faces of many of the people on board the shooter’s vessel, and access to ship’s logs and VMS data, this case should have been quickly and efficiently investigated and resolved, with clear answers provided to media and a concerned public.

“Video evidence of mass murder in any industry should trigger a crisis response by that industry and its regulatory bodies, yet both industry and officials have hidden behind ‘they were probably pirates’ public relations lines. This is not an acceptable explanation, and the international community, fishing nations, and companies purchasing goods from this industry must demand a full, transparent, and accountable investigation.

“If ever there was evidence that life is cheap in Taiwan’s fisheries, this is it.”

The report comes as a yellow card warning from the European Commission is about to expire. Issued on October 1, 2015, Taiwan was given six months to clean up its fisheries or face economic sanction by the E.U.

“These investigations paint a comprehensive picture of an industry in crisis,” said Yen Ning, Ocean Campaigner at Greenpeace East Asia. “Despite talking the talk, Taiwan’s Fisheries Agency appears incapable of monitoring the out-of-control tuna industry. Whether through lack of capacity or otherwise, our investigations reveal devastating impacts on marine life and people’s lives”

“The fishing industries of both Taiwan and Thailand have been shown to have human rights problems,” said Yen Ning. “The murky tuna supply chains of companies like Thai Union have little transparency, which means seafood lovers everywhere may be eating tuna tainted by human exploitation and environmental crime, and they’d never know.”

These human rights abuses seem to go hand-in-hand with environmental abuses. Fins are not allowed to be separated from shark carcasses under legislation Taiwan passed in 2012, but in a single three-month investigation in just one port in Taiwan, Greenpeace East Asia uncovered 16 illegal cases of shark finning. In contrast, an inquiry to Taiwan’s Fisheries Agency showed the same number of cases were recorded over the last 12 months, across the whole of Taiwan.

David Hammond, CEO Human Rights at Sea, said: “Greenpeace should be congratulated on a very detailed piece of civil society investigation backed by significant field research into the matters raised. The quality of the reporting and presentation makes this a must read for establishing factual narratives to be taken into due consideration by interested parties, globally. This publication also acts as an example of gross failures in the respecting of human rights in business.”

Human Rights at Sea introductory commentary on the UN Guiding Principles on Business and Human Rights in the Maritime Environment can be downloaded here.