The Global Ice Center at Weathernews Inc., headquartered in Tokyo, Japan, has announced their 2014 predictions for ice concentration in the Artic Sea. Based on trends observed so far this year, the ice has been receding at a pace consistent with previous years, and experts at the Global Ice Center (GIC) expect this summer’s minimum ice extent to be less than last summer. Weathernews is confident that the Northern Sea Route (NSR) will open in August both on the northeastern passage on the Russian side and northwestern passage along Canada, making the route fully accessible to commercial shipping traffic approximately one month earlier than last year. Use of the NSR by the shipping and energy industries is increasing year-on-year, so the need for detailed information on ice conditions is increasing, too. Weathernews is responding to these needs by providing nowcasts and forecasts to companies operating voyages through the NSR.

Ice in the Arctic Sea started to melt this year from late May, and continues to recede at the same pace seen in the last few years. Currently, the total area of ice coverage is approximately 7.5 million km2. Looking at region by area, ice continues to melt in the Laptev Sea, which is already mostly open water. However wide areas of ice still remain in the East Siberian Sea and the Kara Sea. On the Canadian side, there is also sea ice remaining in the Barrow Straits and even a few places within the Canadian archipelago. Weathernews predicts that soon melting will speed up, heading into the peak of the summer season. Also, ice coverage in September when the greatest area of ice melts in the year could be even less than last summer. However, the GIC says that there is also a slight possibility the minimum ice extent may not reach or exceed the lowest ever recorded surface area seen in 2012. 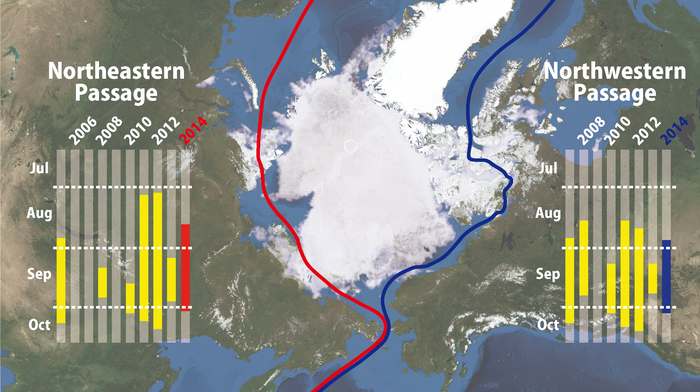 Top: Sea ice distribution in the Arctic Sea current as of July 22nd. Past open periods are indicated in yellow and predicted openings for 2014 are show in red/blue. 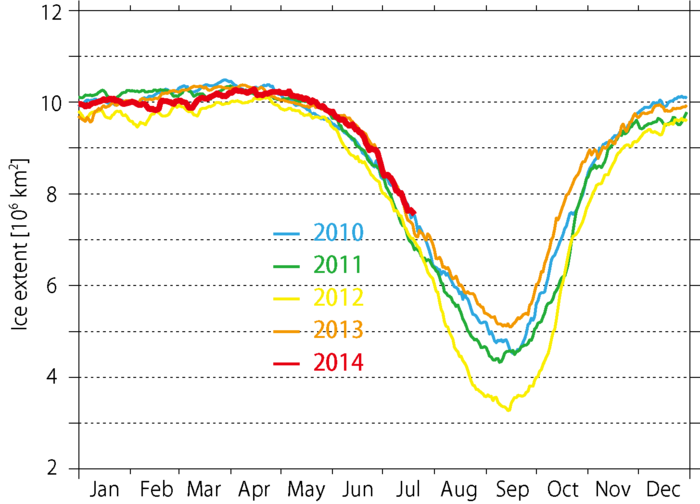 With the expectation that the northeastern passage bordering Russian will open* in mid-August, and the northwestern passage on the Canadian side will follow soon after, the Weathernews forecasts the NSR will be open almost a full month earlier. GIC simulation models show the route starting to close again in early-October, leaving the route open for about six weeks for ships to sail through the Arctic sea while avoiding areas of concentrated sea ice.

According to the NSRA (Northern Sea Route Administration) in Russia, over 400 vessels have applied for permission to sail through the northeastern passage of the NSR as of July 22nd. This shows that the global shipping industry is actively adopting the NSR as an alternative route to longer and more costly routes via canals or around the tip of South Africa. Right now there are already about thirty voyages sailing through the Artic Sea. Due to the risks involved with vessels sailing via the NSR, the need for detailed information on ice conditions has been increasing along with shipping traffic. Based on data analysis and predictions of the Global Ice Center, Weathernews is supporting the shipping industry sailing through the NSR.

*”Open” is defined as a state (judged to from satellite data) where a vessel can sail the NSR via any passage without hitting sea ice.