Dryad Maritime, a team of experienced maritime operations and intelligence specialists and professionals from a variety of commercial disciplines, released its maritime crime figures for 2014 on Monday. See Dryad’s geographic anlaysis below:

The Gulf of Guinea saw an overall reduction in the number of incidents in 2014: a decrease of 18% when compared to 2013. Despite this overall reduction, the year saw a marked increase in the number of attacks resulting in the kidnap of senior crew from support craft and commercial vessels trading in the region. Fourteen vessels had crew taken captive last year, compared to eight vessels having crew kidnapped the previous year. Just two of last year’s attacks occurred inside Nigeria’s 12 nautical mile (nm) territorial waters, with the remainder further offshore where protection from security vessels is less available. A further 14 unsuccessful attacks took place within the Nigerian exclusive economic zone (EEZ). Analysis suggests that the vast majority of these criminal gang attacks were aimed at the kidnap of crew, especially given the areas and weaponry involved. Effective defensive measures employed by crews and security teams meant that these 14 attacks were aborted and were not added to the already higher statistics for kidnap or cargo theft.

This form of maritime crime, a simple extension of a type of crime endemic in Nigeria, is likely to continue in 2015. Victims will likely be released unharmed as long as shipping companies and owners negotiate with the criminal gangs and pay the ransoms demanded. Whilst it is understandable that such ransoms are paid to secure the safe return of crew, such payments will encourage criminals to persist with this lucrative form of maritime crime.

Just three product tankers were hijacked for their cargo of fuel oil during 2014, another steady decrease from a total of five such incidents in 2013 and seven in 2012. The picture could have been a different one with a further five tankers unsuccessfully attacked by heavily armed gangs during the year. The smaller number of successful attacks was, however, overshadowed by a record demonstration of criminal gang reach when Niger Delta-based pirates hijacked the Liberian flagged tanker, MT Kerala, from its Angolan anchorage – some 900nm from Nigerian waters.

Like the kidnap of crew for ransom, cargo theft is likely to remain on the menu of Nigeria based criminal gangs in 2015. The criminal reach demonstrated with the hijack of MT Kerala, the number of successful and attempted attacks in 2014 and the lack of any evidence that such gangs have been neutralized, suggests that further attempts at cargo theft will take place in 2015 across the region.

During 2014 there were only two confirmed attacks on MVs transiting the high risk area (HRA) of the Indian Ocean. MV Nave Atropos was attacked on 17 January south of Salalah and MV Andrea was fired upon from two skiffs 10nm off the Somali coast in February. During the attack on MV Nave Atropos, the pirates used a previously hijacked dhow (MSV Shane Hind) as a mother ship. Despite almost daily reports of suspicious vessels (dhows, fishing boats and skiffs) these three attacks remain the only ones attributed to Somali pirates. Also of significance is the lack of disruption of potential pirate action groups (PAGs) in 2014. During 2013 over a dozen PAGs were detained and destroyed by coalition naval forces but, with the exception of MSC Shane Hind, no other PAG was detected in 2014. This is the lowest level of pirate activity in more than 15 years.

Somali piracy has declined dramatically in the last two years. The continued presence of large numbers of coalition forces, coupled with increased use of best management practices version 4 (BMP 4) measures and the provision of privately sourced armed security teams, has led to the current situation where the threat is broadly contained, if not eradicated. The risk/reward ratio for the pirates is far less favorable now and they have lost the initiative that they once enjoyed when they were able to strike almost at will. Now, the risk of serious injury or death when attacking MVs carrying armed guards, alongside an apparent lack of suitable platforms with which to launch attacks and the positive law enforcement outcomes evidenced recently have no doubt increased the decline of piracy. However, the conditions ashore in Somalia, which contributed to the escalation of piracy in the first place, have changed little.

With no successful hijackings of MVs since that of MT Smyrni in May 2012, the pirate hijack formula is arguably out of date, especially given the success of coalition force interdiction of open ocean piracy and the deterrent factor of embarked armed security teams – now far more prevalent than in the heyday of Somali piracy. With this in mind, the most realistic modus operandi is likely to be relatively short-range attacks with single or double skiff attacks close to the eastern shore of Somalia or, more riskily, off the northern shore of Puntland.

In 2015, it is likely that this broad containment of Somali pirates will continue, provided that the measures that have contributed to this favorable outcome continue to be in place. Remove any one of the ingredients that have resulted in the right medicine to combat the pirate threat – coalition forces, armed guards, BMP compliance – and we could see a return to higher levels of pirate action.

2014 has seen another annual increase in the number of maritime crimes reported across Southeast Asia with a 21% increase in reported maritime crime across the region when compared to the figures for 2013. Dryad’s figures show a total of 214 incidents compared to 177 in the previous year. It is notable that the vast majority of these incidents have taken place within 150 nm of Singapore. These figures include the dramatic rise in cargo theft of fuel from tankers operating out of Singapore. The year also saw the tragic death of a crew member as a direct result of criminal activity.

The three main areas of concern are; firstly, the western Singapore Strait, where we have seen an 80% increase in robberies, attempted robberies and vessel boardings during 2014. Secondly, in the anchorages to the east of the Horsburgh Light where petty theft and attempted theft has been rampant; despite an initiative by the Indonesian Maritime Police to patrol the area, 39 vessels have reported theft or attempted theft. Finally, in the South China Sea there have been 12 attempts at hijacking and cargo theft of fuel from small local product tankers, not all have been successful.

Elsewhere we have seen a rise in petty theft across the Bay of Bengal, mostly in the anchorages around Chittagong, Bangladesh and a small rise in incidents off Vietnam and the Philippines. These increases are offset by a marked reduction in petty theft in the major ports of Indonesia, with the anchorages at Belawan, Dumai, Balikpapan, Samarinda, Taboneo and Surabaya all reporting fewer incidents than in 2013. Although it is difficult to prove with certainty, it is likely that better patrolling of these areas by Indonesian maritime security forces has resulted in this positive trend.

There is no reason to believe that the above areas will continue to feature fewer incidents, again provided that preventative security deterrence remains in place. Unfortunately, the three main areas of concern are likely to remain so unless improvements in deterrence and law enforcement interdiction are made. A very real concern is the fact that criminal gangs are becoming more violent and, without arrest and prosecution, they will continue to operate with impunity, resulting in further injuries and possibly more deaths to mariners.

Figures for maritime crime in areas outside of those already addressed are small by comparison, with only 16 incidents on Dryad’s records for 2014. Ranging from robbery alongside in South America to attacks on yachts in the Caribbean and even the hijack of a sailing vessel in the Mediterranean, these crimes highlight the need for vigilance at sea and in port, and illustrate the need for good awareness of the threats present in the maritime environment.

Other types of crime and conflict continue to affect those who rely upon the maritime environment for trade. From criminally sponsored mass migration across the Mediterranean and trade restrictions imposed in Crimea, to ongoing terrorism activity in the vicinity of shipping lanes and the impact of civil war in Libya, mariners are faced with a diverse range of threats which need to be mitigated. The targeting of MT Araevoby Libyan Air Force jets, which resulted in the deaths of two crew members off Derna on 4 January this year, clearly illustrates the need for local awareness and proper risk mitigation in all areas of operation.

The maritime industry and its mariners welcome the continued decline in Somali piracy, but would be wise to avoid any complacency that might emerge from this encouraging picture. When something like the multi-faceted approach to the piracy problem appears to be working, the industry would be ill-advised to change the medicine. The current situation does, however, present opportunities for more innovative and cost effective approaches to risk mitigation. Armed guards play their part in the HRA and have clearly evidenced their effectiveness in recent years, but they are not needed on all vessels, in all areas and in all environments. Good maritime domain awareness, comprehensive risk assessments and vessel monitoring can be equally effective and more financially attractive in many circumstances.

In the Gulf of Guinea and Southeast Asia, the prognosis is for more of the same with the key concern being the level of violence used by criminals in both areas. Regional issues and the nature of the threat in these areas do not lend themselves to an Indian Ocean type solution, but there is plenty that ship operators and masters can do to reduce the risk of falling victim to crime, either themselves or with professional support.

The year ahead will doubtless present new challenges for the industry, but good preparation and consideration of the diverse range of threats will hopefully result in favorable, downward trends in maritime crime. Outside of the normal areas of maritime crime we are likely to see other risks from terrorism to civil strife. Avoiding complacency, doing the hard miles on risk mitigation and investing in protecting mariners are the absolute keys to success. Let’s not have another year where we are reporting the death of mariners! 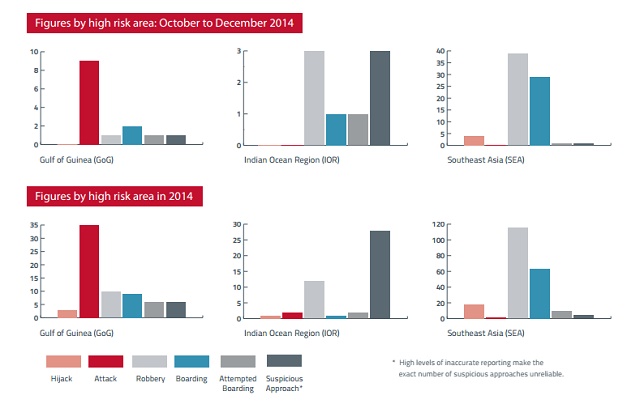 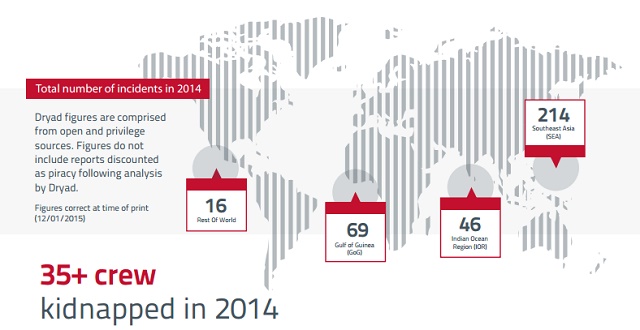 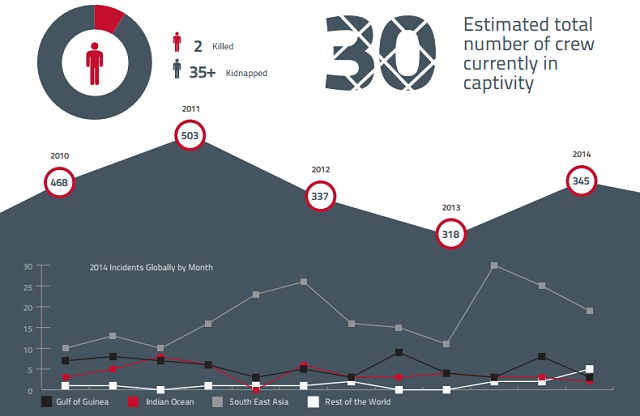