20 Rescued from Ship in Danger of Sinking

The Indian Navy rescued 20 crew members aboard a container ship in danger of sinking Monday morning.

The 9,107 dwt Jindal Kamakshi began to take on water in the late evening about 40 nautical miles off of Mumbai harbor. The ship became unstable and started to list 20 degrees to one side. At 11:10pm the Indian Navy received a distress call from the Jindal Kamakshi and deployed a rescue helicopter to the scene. The ship’s master indicated that an immediate evacuation was not needed at the time, and the helicopter returned to base.

The Indian Navy continued to monitor the situation through the early morning hours. By about 6:00am strong winds and heavy rain had exacerbated the situation, forcing the captain to call for an immediate evacuation of everyone on the vessel. Since weather conditions had become too dangerous to conduct a rescue by ship, the Seaking helicopter was redeployed to the area and tasked with the rescue operation.

All 19 crew members aboard the ship were successfully rescued at around 8:00am and brought to the Indian naval airstation, INS Shikra in Mumbai. The ship’s master was subsequently evacuated by a second helicopter operated by the Indian Coast Guard. 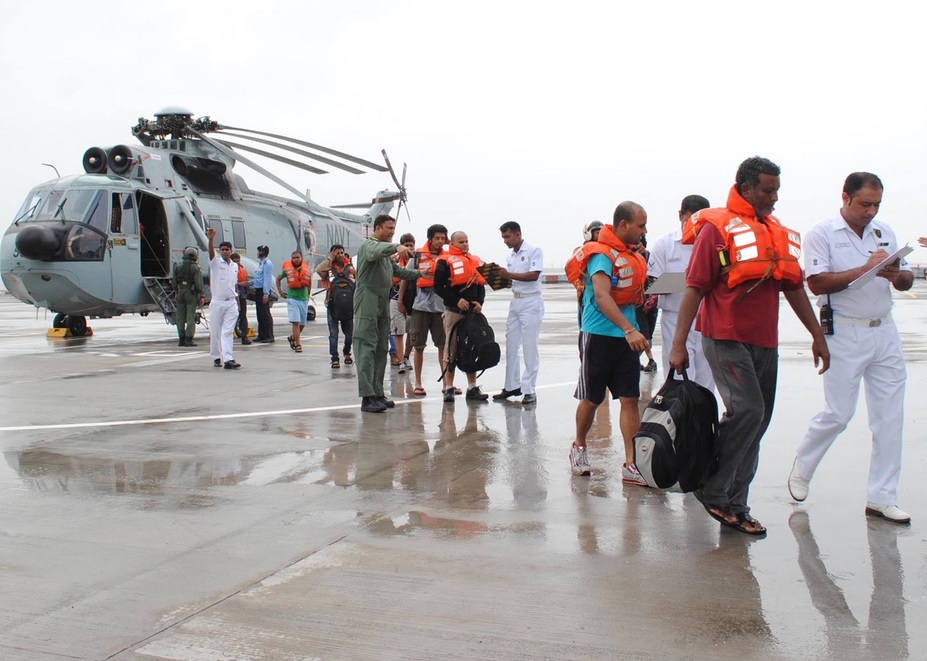 No one was injured in the rescue operation and the crew expressed gratitude to the Indian Navy and Coast Guard for conducting the prompt rescue.

Currently, the Jindal Kamakshi is anchored and abandoned. Local authorities were able to stabilize the ship and are continuing to monitor the situation.